Extreme makeover for the curriculum: we tossed out the lectures and replaced them with embodied experience. Students in Field Investigations in Biology (one half of our introductory biology course sequence) have for several years now been tromping the woods, measuring skulls, and poking around in the sewage treatment plant, experiencing ecology, evolution, and biological diversity through feet, noses, ears, and hands. Why not use the apps that came installed (free!) in our bodies. We’re not yet brains-in-jars.

One of the sites that we visit is near Sewanee’s “Piney Point.” Near the point is a sandstone outcrop, home to plants and animals with a taste for lichen-crusted pizza stones. The exposed rock blazes. Fence lizards bask, Cladonia lichen crinkles.

Limbs shed from drought-twisted pines provide cover for animals on the hottest days. To supplement this meager shade, we’ve lain a few small plywood boards at the site. The boards are class-lures. There is nothing like prepared spontaneity. Let’s lift the board: oh my, scorpions! Who knew? 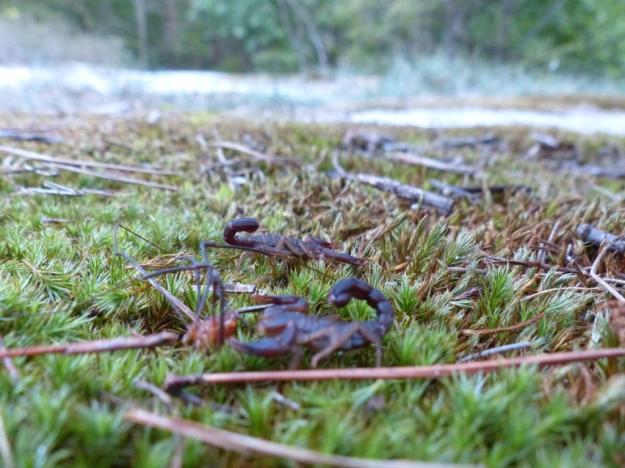 During last week’s class, Kirk Zigler, my colleague and fellow poker-under-boards, found not only solitary scorpions, but paragons of arachnid family values. I had to scuttle out there to see for myself. 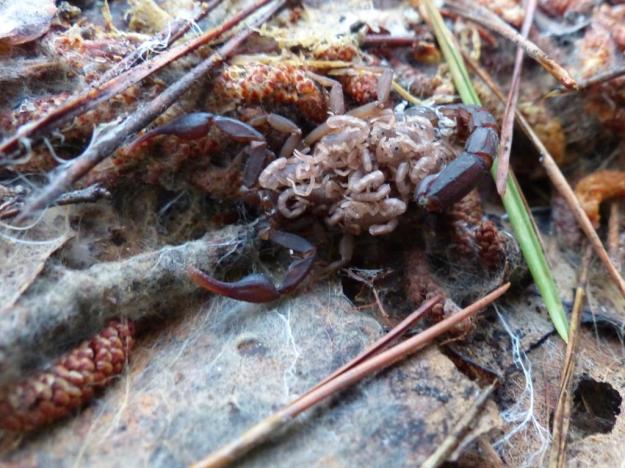 Scorpions jockeyed by their babies. The youngsters cluster on their mothers’ backs, finding refuge under the stinger. Each juvenile has its own curled, spiked tail. The overall effect is a jumble of gramigna pasta. The dish simmers with enough promise of spicy mouth-feel to deter even the more reckless eater. 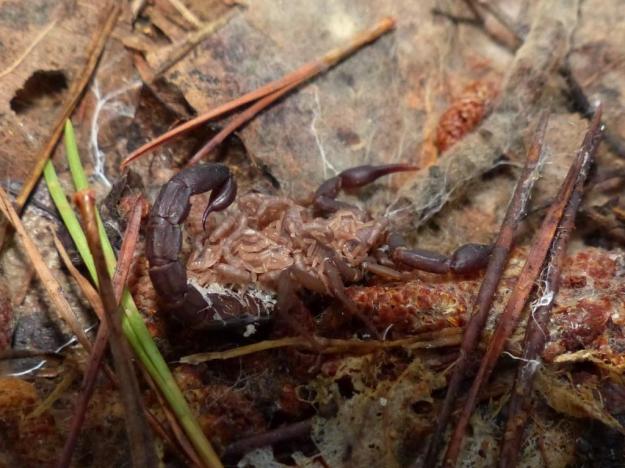 Where-ever exposed rock meets jumbles of downed wood, scorpions will thrive. If your house happens to sit next to such a site, expect guests. Lydia Boroughs saved one such creature for me to show-and-tell in class and then photograph.

Archno-Adonis mirrored by a flashlight’s glare: 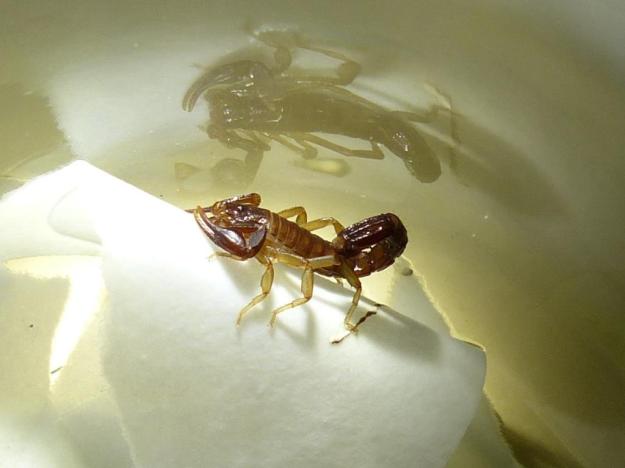 The same scorpion, under ultra-violet “blacklight”: 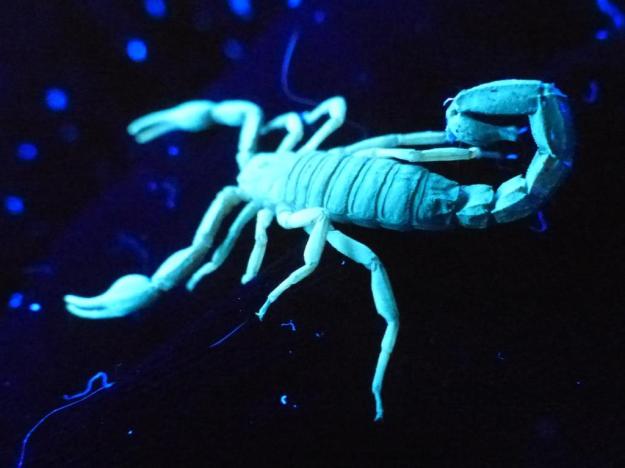 Ring-like molecules in scorpions’ exoskeletons snare the ultra-violet light, then throw it back as a blue-green glow. It’s unlikely that such a trick evolved just to amuse bulb-wielding primates. One explanation is that the glow lets scorpions receive and detect low levels of light, using their exoskeleton as another “eye.” When UV light levels are high,  scorpions hide, sitting out the bright day and sunset. Even when white light is absent, the animals detect and respond to ultraviolet.

This is a curious arrangement, but no stranger than the rest of the scorpions’ visual system. Scorpions have both median and lateral eyes. The median eye sits in the center of the “back” and forms images of high visual acuity. The lateral eyes vary considerably in number from species to species and are used to perceive subtle differences in light intensity at night, presumably letting scorpions orient as they forage at night and calibrate their daily clocks. The UV-gleamed exoskeleton shines into these lateral eyes, opening a new dimension of vision.

In searching for the latest information about scorpion eyes, I discovered that the most comprehensive study of their evolution and taxonomy was recently published by Stephanie Loria and Lorenzo Prendeini. Stephanie is a friend and former student now completing her PhD on scorpion biology at the American Museum of Natural History in Manhattan. Peering under cover-boards on Sewanee’s sandstone can be addictive… and lead to some interesting places.