Extreme makeover for the curriculum: we tossed out the lectures and replaced them with embodied experience. Students in Field Investigations in Biology (one half of our introductory biology course sequence) have for several years now been tromping the woods, measuring skulls, and poking around in the sewage treatment plant, experiencing ecology, evolution, and biological diversity through feet, noses, ears, and hands. Why not use the apps that came installed (free!) in our bodies. We’re not yet brains-in-jars.

One of the sites that we visit is near Sewanee’s “Piney Point.” Near the point is a sandstone outcrop, home to plants and animals with a taste for lichen-crusted pizza stones. The exposed rock blazes. Fence lizards bask, Cladonia lichen crinkles.

Limbs shed from drought-twisted pines provide cover for animals on the hottest days. To supplement this meager shade, we’ve lain a few small plywood boards at the site. The boards are class-lures. There is nothing like prepared spontaneity. Let’s lift the board: oh my, scorpions! Who knew?

During last week’s class, Kirk Zigler, my colleague and fellow poker-under-boards, found not only solitary scorpions, but paragons of arachnid family values. I had to scuttle out there to see for myself.

Scorpions jockeyed by their babies. The youngsters cluster on their mothers’ backs, finding refuge under the stinger. Each juvenile has its own curled, spiked tail. The overall effect is a jumble of gramigna pasta. The dish simmers with enough promise of spicy mouth-feel to deter even the more reckless eater.

Where-ever exposed rock meets jumbles of downed wood, scorpions will thrive. If your house happens to sit next to such a site, expect guests. Lydia Boroughs saved one such creature for me to show-and-tell in class and then photograph.

Archno-Adonis mirrored by a flashlight’s glare:

The same scorpion, under ultra-violet “blacklight”: 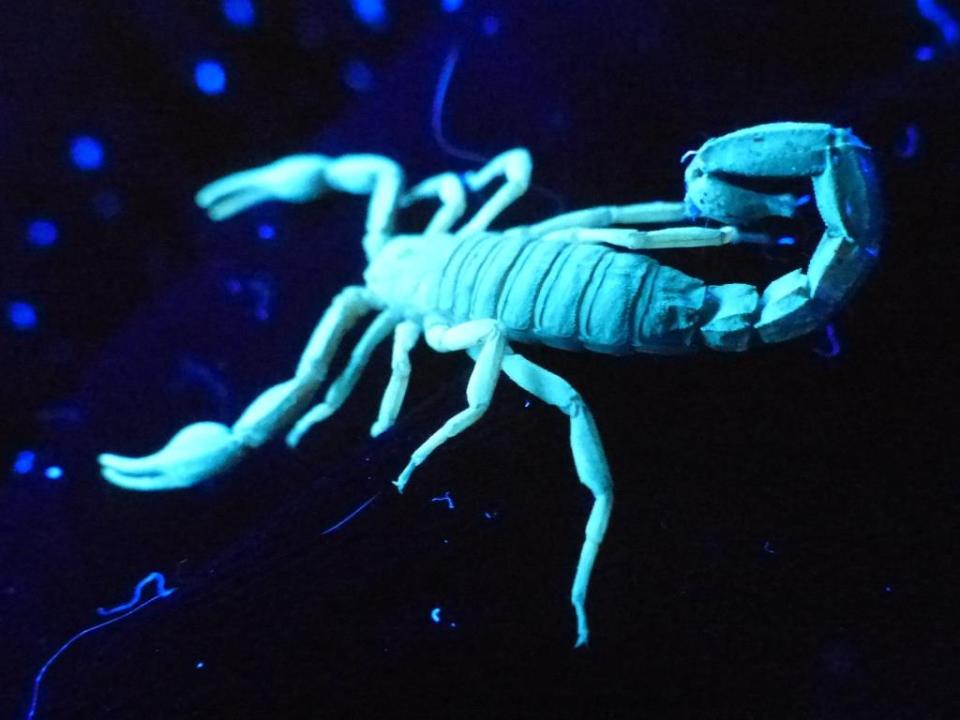 Ring-like molecules in scorpions’ exoskeletons snare the ultra-violet light, then throw it back as a blue-green glow. It’s unlikely that such a trick evolved just to amuse bulb-wielding primates. One explanation is that the glow lets scorpions receive and detect low levels of light, using their exoskeleton as another “eye.” When UV light levels are high,  scorpions hide, sitting out the bright day and sunset. Even when white light is absent, the animals detect and respond to ultraviolet.

This is a curious arrangement, but no stranger than the rest of the scorpions’ visual system. Scorpions have both median and lateral eyes. The median eye sits in the center of the “back” and forms images of high visual acuity. The lateral eyes vary considerably in number from species to species and are used to perceive subtle differences in light intensity at night, presumably letting scorpions orient as they forage at night and calibrate their daily clocks. The UV-gleamed exoskeleton shines into these lateral eyes, opening a new dimension of vision.

In searching for the latest information about scorpion eyes, I discovered that the most comprehensive study of their evolution and taxonomy was recently published by Stephanie Loria and Lorenzo Prendeini. Stephanie is a friend and former student now completing her PhD on scorpion biology at the American Museum of Natural History in Manhattan. Peering under cover-boards on Sewanee’s sandstone can be addictive… and lead to some interesting places.

…and, for the sage,
Let spear-grass and the spiteful thistle wage
War on his temples. Do not all charms fly
At the mere touch of cold philosophy?
There was an awful rainbow once in heaven:
We know her woof, her texture; she is given
In the dull catalogue of common things.
Philosophy will clip an Angel’s wings,
Conquer all mysteries by rule and line,
Empty the haunted air, and gnomed mine –
Unweave a rainbow, as it erewhile made
The tender-person’d Lamia melt into a shade.

Rest easy, John, the spinnerets of awareness are still weaving rainbows. Consciousness dwells in its gnomed skull-mine. Ontological mystery remains, despite the sages’ best efforts to clip and conquer.

Yet, it is not the sage, but the rainbow-spider herself who is most enamored with rule and line: the geometry that will snare her sustenance from the insect-haunted air. Her silk is woof and texture of protein, stranded and coiled, a fiber of living glass.

Now I am sensible all this is a mere sophistication (however it may neighbor to any truths), to excuse my own indolence – so I will not deceive myself that man should be equal with Jove – but think himself very well off as a sort of scullion-Mercury, or even a humble Bee. It is no matter whether I am right or wrong, either one way or another, if there is sufficient to lift a little time from your shoulders. — Keats letter to Reynolds, 1818

They’ve been around since the Devonian, 380 million years ago. This one was on the kitchen table, threatening my finger. It scuttled backward as it waved pincers at the looming digit. A dozen of these creatures could stand on a single cherry pit, so the display was heavy on charm and light on fearsomeness. 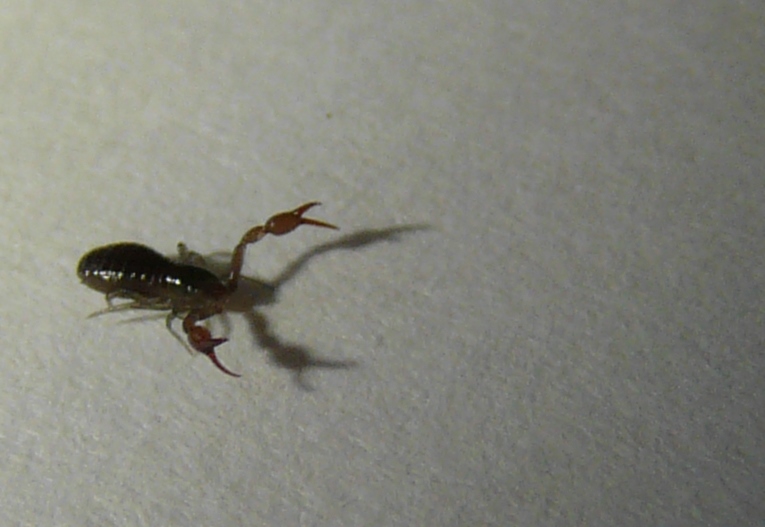 Although pseudoscorpions are quite abundant, we seldom see them. They hide in and under vegetation, inside empty snail shells, under rocks. Our eyes are rarely tuned to their scale.

Many pseudoscorpion species have the unusual habit of “riding” larger flying insects to hitch rides to new habitats. Some of these beasts of burden include the cerambycid beetles that I watched several weeks ago on the fallen ash. Next time, I’ll pay closer attention to the beetles’ bits and bridles.

Riders are ridden: some nematodes move about by clinging to pseudoscorpions.

So nat’ralists observe, a flea

Hath smaller fleas that on him prey;

And these have smaller fleas to bite ’em.

And so proceeds Ad infinitum.

Just under the petal’s lip sat a small green spider. The fly landed. The petal twitched. The spider’s tidy fangs sank into the fly’s crunchy exoskeleton.

Next day, the spider sat on the same flower, but this time on the upper surface of a petal. The spider held its arms to the sky, keeping utterly still. Even some pokes from a piece of straw did not break its steely immobility. While I watched, no flies came to visit. 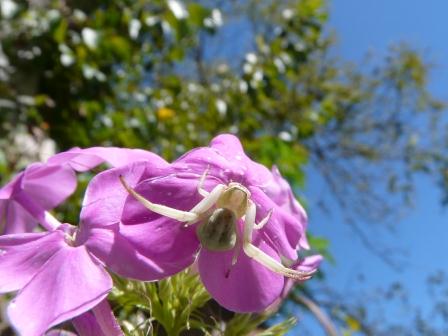 Crab spiders add a streak of danger to the cosy relationship between flowers and their pollinators. There are hundreds of species of these spiders (named, of course, for their crabby look while sitting) and in some habitats (e.g., Sewanee’s fall blooming meadows and roadsides) they are quite common. Their sit-and-wait hunting strategy makes them inconspicuous, but close attention (or the movements of unfortunate flies) will reveal their presence.

How many poems feature thorns and roses? Crab spiders seem so much more interesting. Not just the prick of a thorn, but the dying fall of a poisoned bite. And all the fly wanted was to touch its feet to a flower, to sip a drop of nectar. OK, that’s a pretty overworked theme. How about the flower’s perspective? A display of beauty, a straightforward offering of pollen, yet here come the Arachnid riff-raff, ready to knife the honest customers.

Halloween brought the blood-feeding ghouls and vampires out onto the streets last night. None were more fearsome that the black-legged ticks (Ixodes scapularis) that Neptune the Tick-Gathering Cat brought in. I tweaked an engorged tick off his neck, only to find that I had interrupted an acarine love-fest.

The female feeds and swells with blood, while the male wanders over her adoringly and finally inserts a small sperm packet into a pore. For their libidinous sins, they burned in the fires of hell: not wanting dozens of baby ticks in a few months, I tossed them in the wood-stove. 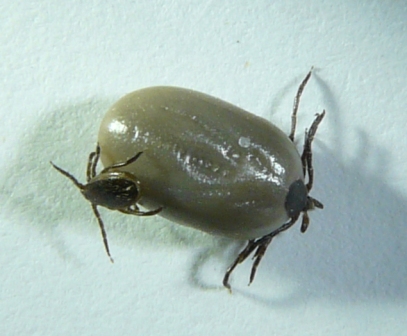 Does this blood meal make my butt look big?

Later, Junebug the Hound brought in a female of the same species that had not yet fed. The difference is fearsome; these ticks actually grow new skin to accommodate their meals. 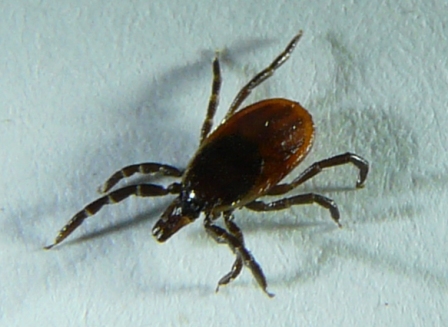