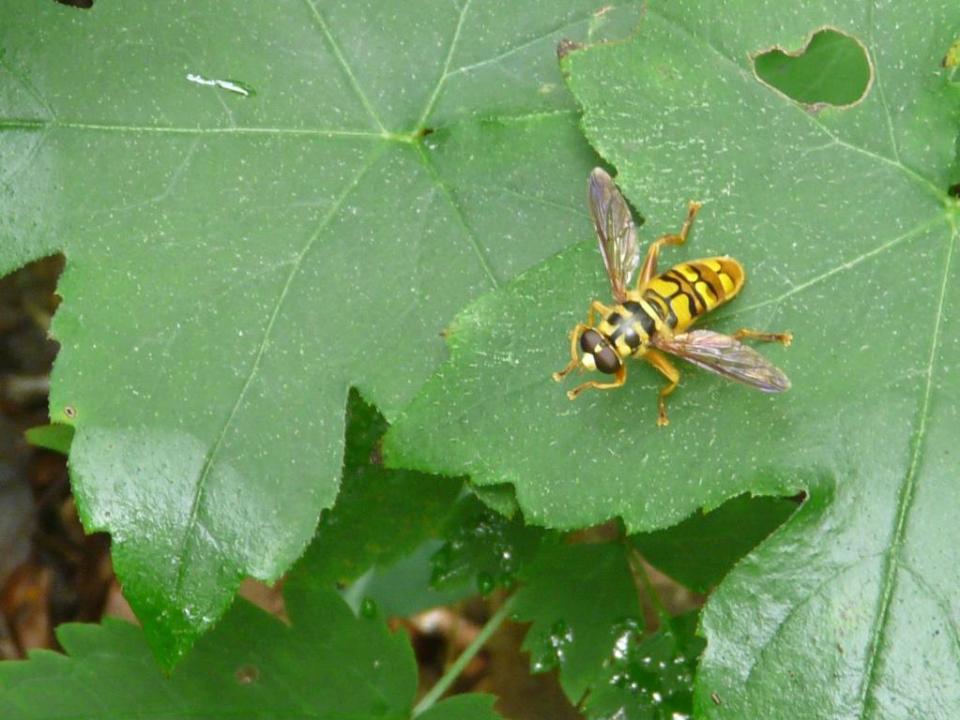 The common name for this wasp-mimicking fly is “news bee” or, more optimistically, “good news bee.” The moniker was given to the insect for its habit of zipping through the air toward a human then holding steady, imparting the news in a loud buzz. Once the news has been sung, the fly flings itself away to find another willing ear.

This habit might also account for the generic name of the species, Milesia (this one is Milesia virginiensis, I believe). Milesian tales are lurid, captivating short fables, named for Aristides of Miletus, “a writer of shameless and amusing tales with some salacious content and unexpected plot twists” (or so says that rock of classical knowledge, Wikipedia). A fly’s version of a Milesian tale would be fun to hear, but regrettably I could not translate the buzz that I heard in Shakerag Hollow and so missed this Dipteran’s narrative complications and witty innuendo. Maybe you can do better: my recording of the insect follows. The fly was perched on a leaf, washing its forelegs. Suddenly it launched itself and flew to me to give The News. Once done, the fly darted away to gossip at a fallen tree, then shot out of earshot.

(Web browsers differ in how they handle sound files, so I have uploaded two files: the first is mp3 and the second is m4a. You’ll either see a “play” button, an option to download, or both. The background sounds are cicadas and a Carolina wren.)

20 thoughts on “An entomological Milesian tale”