They’re forest beacons, glowing come-hithers to migrant birds. These gene catapults, each carrying a plant’s hope for another generation, are ripening this week in Sewanee and across the eastern US. Not coincidentally, thrushes and other south-bound birds are also on the move (see BirdCast for the feathered forecast near you).

Some fruits from the woods near Sewanee: 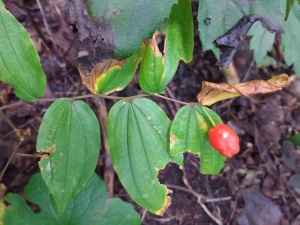 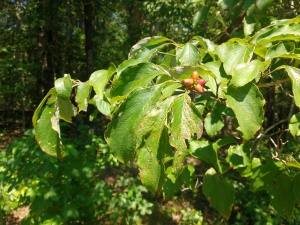 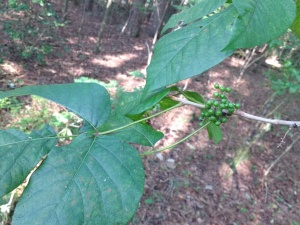 “Yet mark’d I where the bolt of Cupid fell:
It fell upon a little western flower,
Before milk-white, now purple with love’s wound”

Hepatica unfurls its advertisements in both white and purple. This is true of North American species and those in Asia. Why the variation? Natural selection or genetic drift eliminates variation in a population unless some force keeps these purgative pressures at bay. In the case of Hepatica, the costs and benefits of white and purple flowers have not been measured in the wild (readers, correct me if I’m wrong here, please!).  Midwestern populations are more purple than their eastern cousins.

Could pollinators or the light environment be creating different selection pressures? Many populations contain a mix of colors (white is the most common here in Sewanee, but purples are scattered among them in significant numbers), so selection does not seem to favor just one color in each location.

In spring beauty flowers (Claytonia), flowers come in red, white, and intermediate. Natural selection acts on flower color in this species complex ways. Redder flowers are more attractive to pollinators, but whiter flowers have more flavonols, chemicals that act as herbivore deterrents. So, white flowers receive fewer pollinators but red flowers get more damage from slugs. Damage from herbivory changes from year to year and from place to place. So two opposing forces — pollination and herbivory — vary in space and time, resulting in a mix of flower colors. Perhaps a similar turbulent, Puckish convergence of forces also acts on Hepatica?

I have an opinion piece in today’s New York Times. I will run in the Sunday print edition. Regular readers of Ramble will recognize some of the scenes and characters: bloodroot and foxes in Shakerag Hollow. I hope you’ll consider reading, sharing, and commenting. The Times loves to see reader engagement. So far, people are weighing in with their own experiences and thoughts about the seasons.

The Times requires a fact-checked version of articles from all contributors. I’ve pasted below a shortened version of what I provided to them (minus the pdfs of relevant scientific articles and some longer quotes from papers). In the so-called “fake news” era, it’s important to note that some news outlets have a strong commitment to getting the facts right. Whether we agree with “opinion” is another matter, of course.

Red maples in bloom in New York before snow storm:

Teens in March: nights of March 14th and 15th in Sewanee, TN.

Privet, bittersweet and honeysuckle earliest to leaf out: In Sewanee, TN.

Changes in phenology in northern hemisphere:

2.8/days per decade is from: Parmesan, Camille. “Influences of species, latitudes and methodologies on estimates of phenological response to global warming.” Global Change Biology 13.9 (2007): 1860-1872.

And, for damage from combination of warm February then March freeze: https://www.washingtonpost.com/news/capital-weather-gang/wp/2017/03/09/cherry-blossoms-could-be-seriously-damaged-by-upcoming-cold-snap/?utm_term=.d1f4902fcbde

NOAA data on February temperature records: http://www.noaa.gov/news/us-had-2nd-warmest-february-and-6th-warmest-winter-on-record “Most locations across the contiguous U.S. were warmer than average during February. Thirty-nine states from the Rockies to the East Coast were much warmer than average, with 16 states across the South, Midwest, Mid-Atlantic and Northeast record warm. Below- to near-average temperatures were observed for the Northwest, with no state ranking record cold.” And, in the final report: https://www.ncdc.noaa.gov/sotc/national/201702 “Thirty-six states had maximum temperatures that were much above average, with 19 states in the Southern Plains, Midwest, and along the East Coast having record warm maximum temperatures.”

NOAA projections for next 2-3 months: http://www.cpc.ncep.noaa.gov/products/predictions/long_range/seasonal.php?lead=1

Maps are based on:

“This dataset is derived from daily interpolated meteorological data, and results are compared with historical station data to ensure the trends and variations are robust. Regional trends in the first leaf index range from −0.6 to −1.7 days per decade, while first bloom index trends are between −0.2 and −1.4 for most regions.”

Summary of model at: https://data.globalchange.gov/report/indicator-start-of-spring

“The model is based on (1) long-term observations of lilac and honeysuckle first-leaf and first-bloom, collected by citizen science volunteers at hundreds of sites across the contiguous United States, and (2) daily minimum and maximum temperatures measured at weather stations.”

Satellite data on changing seasonality around the globe:

“We found that leaf phenology changed substantially in most regions of the world, with 95% of the land surface changing by at least 1 s.d. for at least one metric.” And “We show that the phenology of vegetation activity changed severely (by more than 2 standard deviations in one or more dimensions of phenological change) on 54% of the global land surface between 1981 and 2012.”

“Climate change is likely to enable all three species to greatly expand their ranges. Risk from privet and kudzu expands north into Ohio, Pennsylvania, New York, and New England states by 2100. Risk from cogongrass expands as far north as Kentucky and Virginia. Heightened surveillance and prompt eradication of small pockets of invasion in northern states should be a management priority”

“Woody species are now leafing out an average of 18 d earlier than they did in the 1850s, and are advancing at a rate of 5 ± 1 d °C−1.” “…invasive shrubs generally have weaker chilling requirements … leaf out faster in the laboratory and earlier in the field; native trees have the strongest chilling requirements.”

“Native plant species whose phenology did not track climate change declined in distribution, whereas species that became more widespread all exhibited earlier flowering. In contrast, alien neophytes showed both a stronger phenological response to warming and a more marked increase in distribution, but no link between the two.”

“In a comparison of nine Dutch populations, we find that populations have declined by about 90% over the past two decades in areas where the food for provisioning nestlings peaks early in the season and the birds are currently mistimed. In areas with a late food peak, early-breeding birds still breed at the right time, and there is, at most, a weak population decline.”

Møller, Anders Pape, Diego Rubolini, and Esa Lehikoinen. “Populations of migratory bird species that did not show a phenological response to climate change are declining.” Proceedings of the National Academy of Sciences 105.42 (2008): 16195-16200.

“Species that declined in the period 1990–2000 did not advance their spring migration, whereas those with stable or increasing populations advanced their migration considerably. On the other hand, population trends during 1970–1990 were predicted by breeding habitat type, northernmost breeding latitude, and winter range (with species of agricultural habitat, breeding at northern latitudes, and wintering in Africa showing an unfavorable conservation status), but not by change in migration timing.”

Plasticity in the timing of breeding for songbirds:

“Plasticity in the timing of breeding appears to be relatively high in many songbirds…because in different years some individuals may vary their breeding dates by almost a month in response to local weather conditions” “Evidence for long-term changes in the phenology of birds is accumulating rapidly from around the world.”

“To do this, we identify a set of core ecological processes (32 in terrestrial and 31 each in marine and freshwater ecosystems) that underpin ecosystem functioning and support services to people. Of the 94 processes considered, 82% show evidence of impact from climate change in the peer-reviewed literature.”

Climate change effects in the ocean:

“Using long-term in situ observations of leaf unfolding for seven dominant European tree species at 1,245 sites, here we show that the apparent response of leaf unfolding to climate warming (ST, expressed in days advance of leaf unfolding per °C warming) has significantly decreased from 1980 to 2013 in all monitored tree species. Averaged across all species and sites, ST decreased by 40% from 4.0 ± 1.8 days °C−1 during 1980–1994 to 2.3 ± 1.6 days °C−1 during 1999–2013. The declining ST was also simulated by chilling-based phenology models, albeit with a weaker decline (24–30%) than observed in situ. The reduction in ST is likely to be partly attributable to reduced chilling.”

As wildflowers emerge, they briefly take on a sleek, streamlined form as they swim upward through the duff.

Some photos of these rising hopefuls from the last few weeks in Shakerag Hollow, toadshade trillium, bloodroot, May apple: 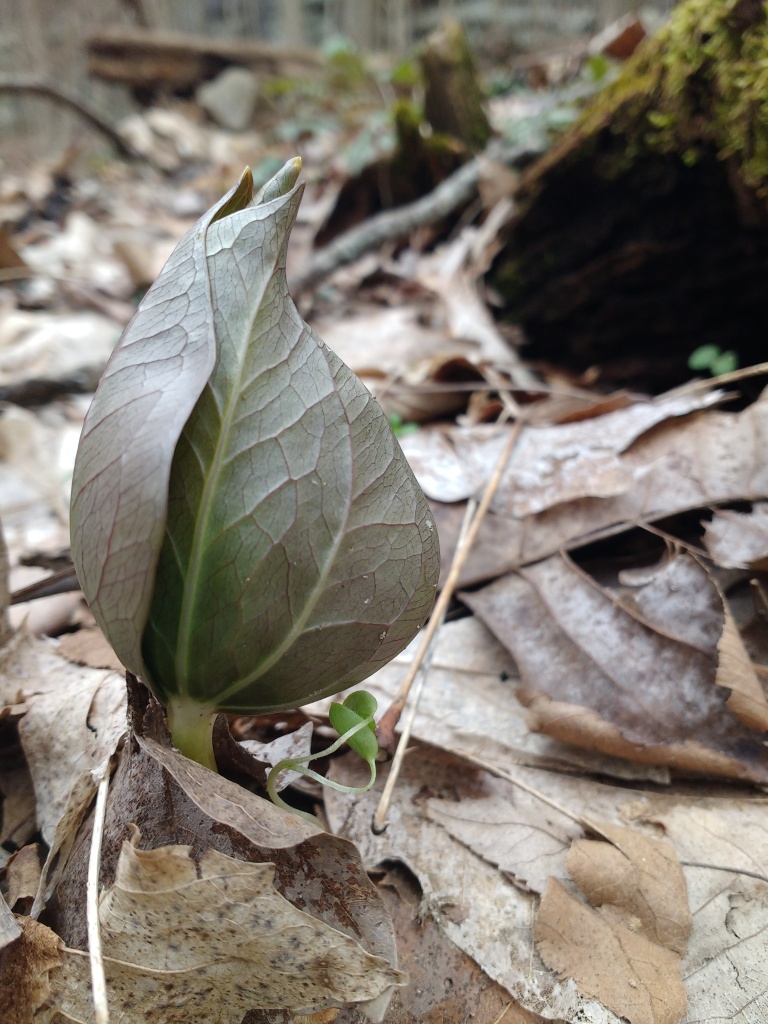 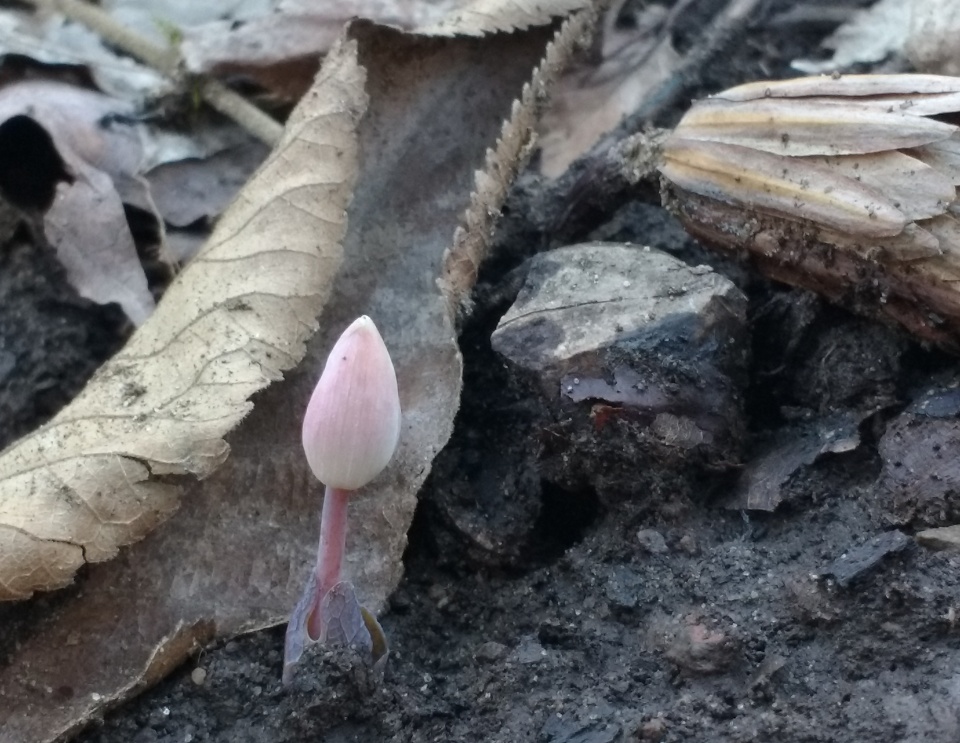 Meanwhile, spring trumps winter in Shakerag Hollow, with “harbinger of spring,” Erigenia bulbosa, emerging by the dozens. A warm winter… 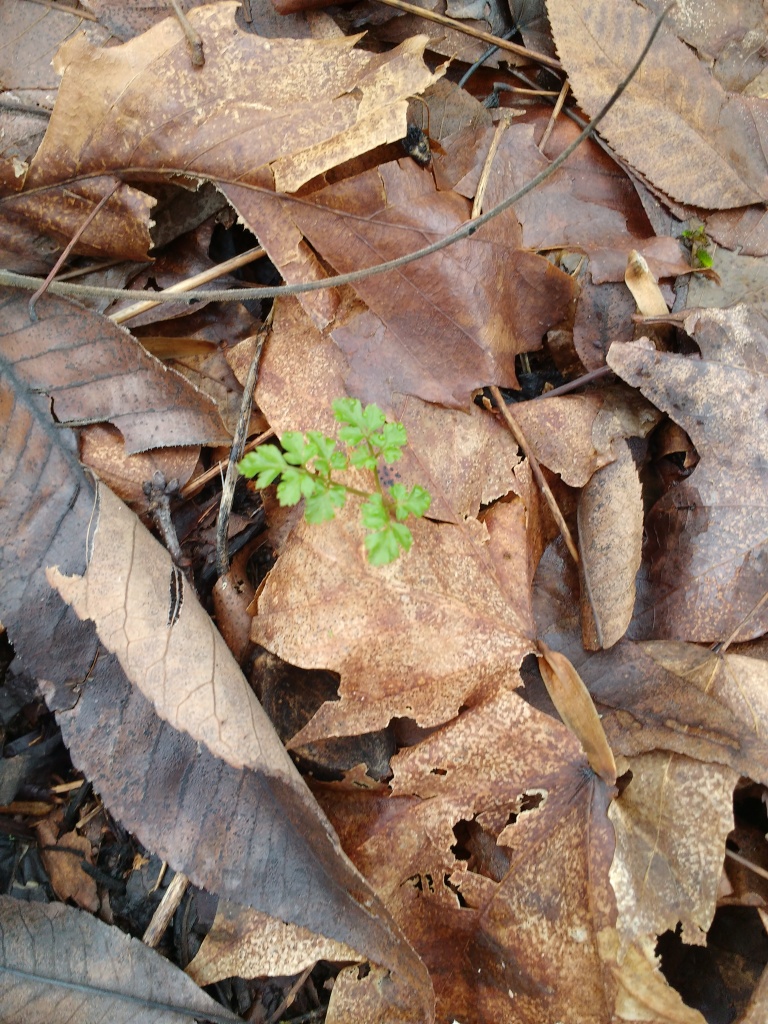 In Shakerag Hollow, the leaf litter is down to almost nothing. Bare mineral soil, a few twigs. Last year’s downed leaves — once lying several inches thick — have now had their energy and matter dissolved away into the forest’s blood. In a few weeks, ground will fatten with a fresh fall of leaves, but for now all feels empty and exhausted. Six weeks of sunshine and no rain have added their burden: the soil is desiccated. 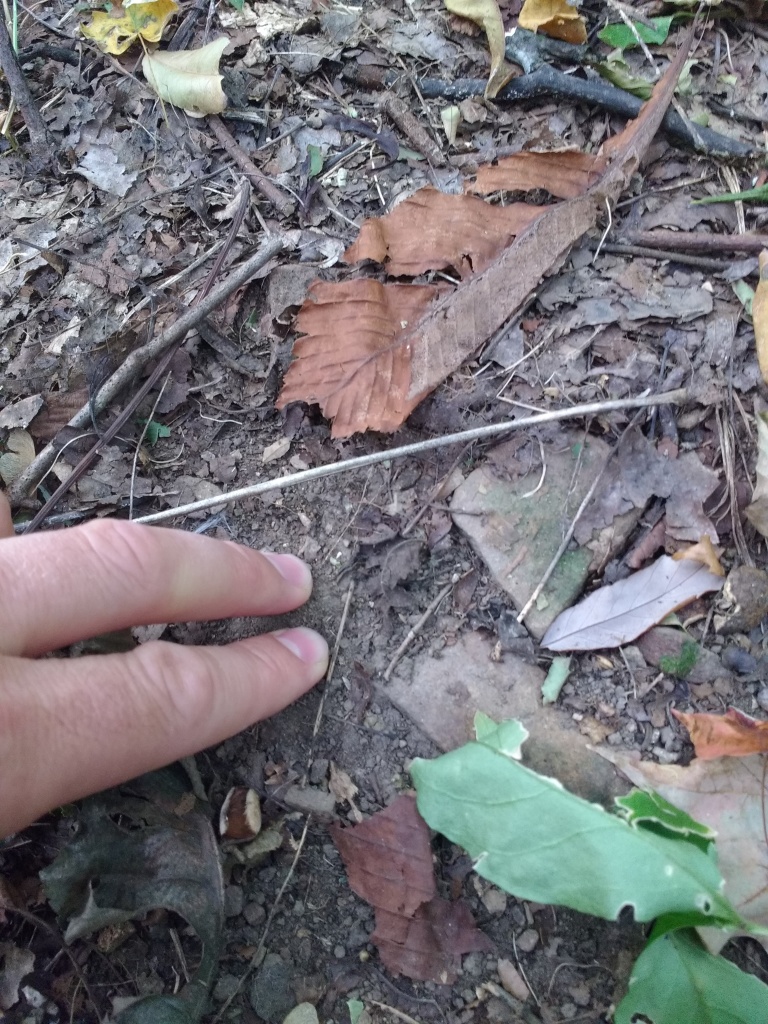 It was not always like this. At the peak of the last glaciation, the Cumberland Plateau was a spruce-fir forest, analogous to the boreal forests of Canada and the northern US. In such forests, cold temperatures, a short growing season, and more regular rainfall keep the soil’s litter well padded. Leaf litter seldom decomposes fast enough to reveal the mineral soil below. Instead, it builds into a spongy duff. Atop this bed, mosses and mushrooms exult. Contrast the photograph above with these images from Grafton Notch in a higher elevation forest in Maine. Time travel to the end of the Pleistocene. 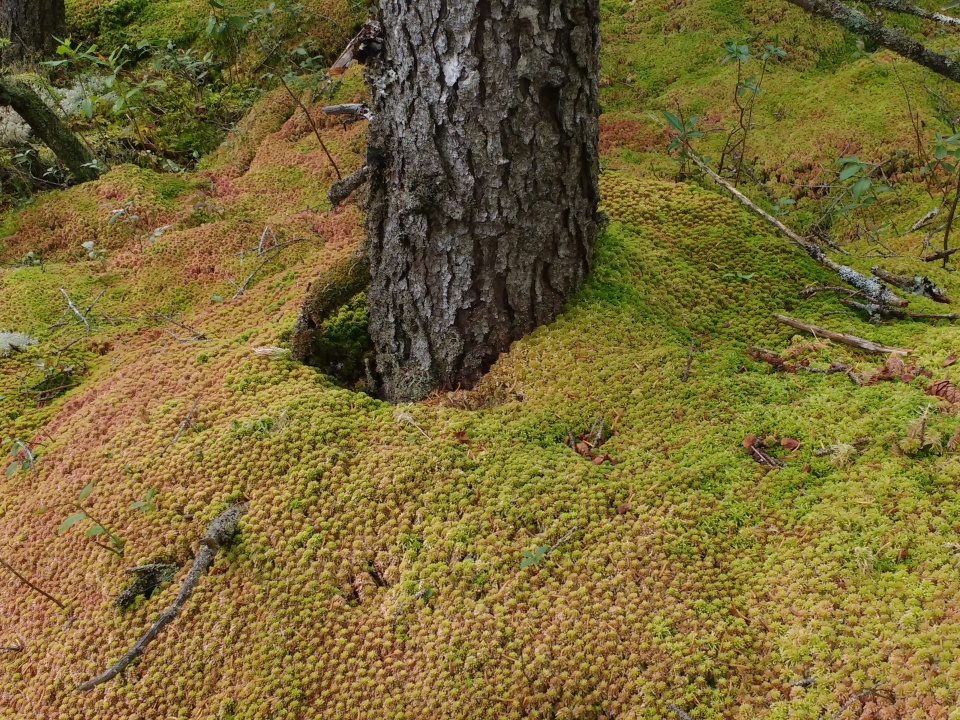 The many greedy layers of the forest canopy in Shakerag Hollow gobble the light. It is darker at ground level now than it is in mid-winter. Most understory plants are in hunker-down-and-sip mode.

One or two species, though, know that the forest hosts summer-warmed bees. In sunflecks on the forest floor, these blooms burn holes in the daylong gloam. 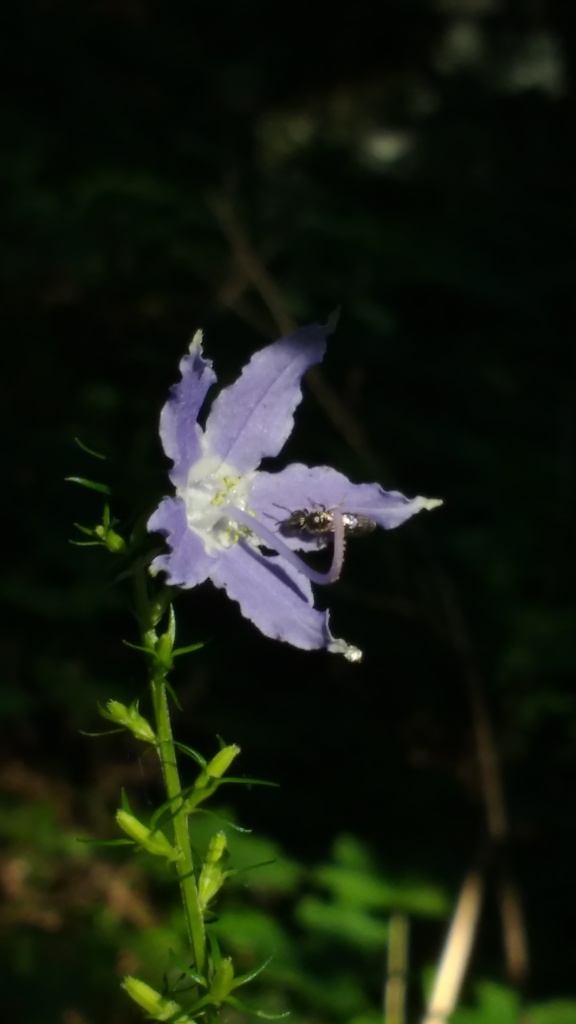 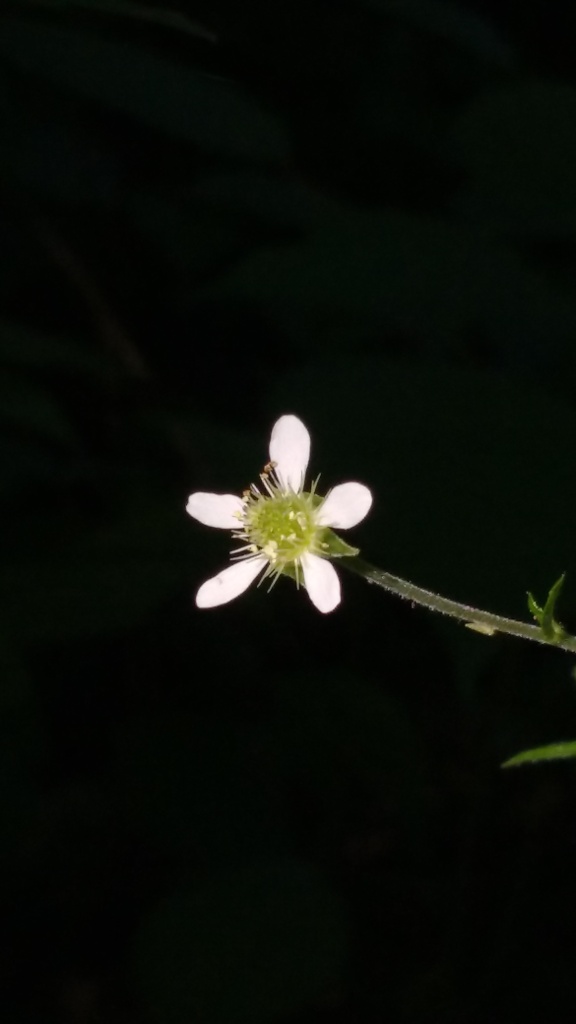 And, yet more brightness, students from Sewanee’s Young Writers’ Conference, taking a saunter, learning a few tales from the woods. Listening on all sides, perhaps, and filtering. Peering with me through the dim light.

I’ve had an infrared-triggered camera set up in Shakerag Hollow for the last few months. The camera takes photos of animals as they climb along or walk around the fallen ash tree. The camera takes color pictures during the day, then at night uses an infrared flash that is invisible to animals.

The huge log is quite a highway. Squirrels are by far the most abundant creatures, but others also make appearances.

Shakerag Hollow continues its tumble through spring. The earliest blossoms are gone and fruits are fattening in their place. So goes the bloom of youth. The later flowers have now stepped forward and are waving for all they’re worth at the motley collection of pollinating bees, wasps, and flies. A few of my favorites: 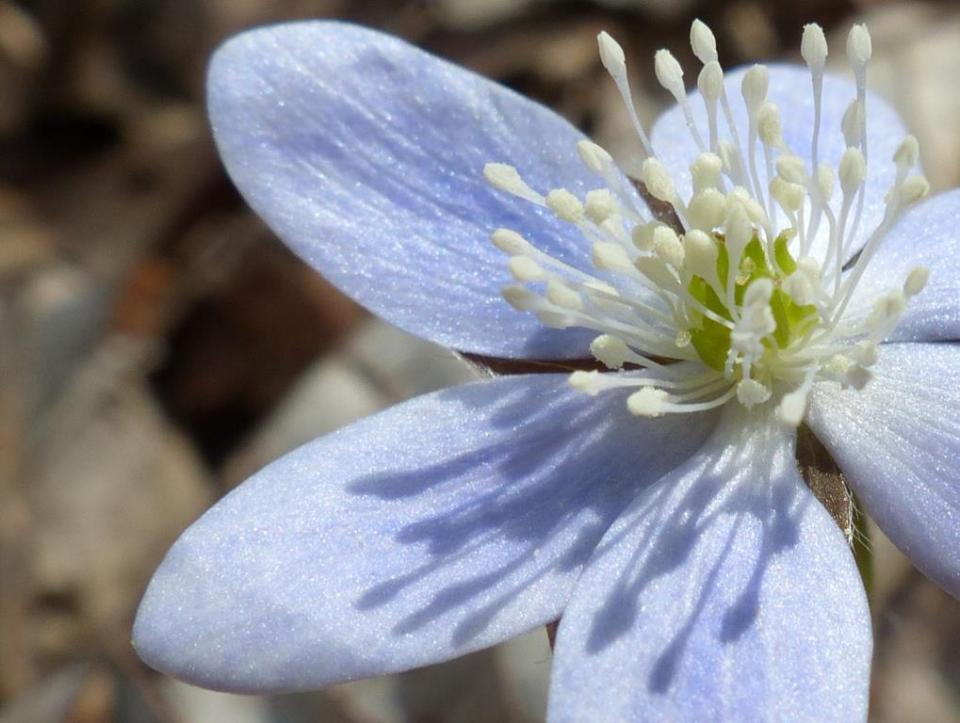 Hepatica. Most bloomed weeks ago; a few persist.

Larkspur. So violet it makes your eyes hurt.

Spotted Mandarin. Most fabulous name in the woods.

Celandine poppy. The zenith. The nonpareil.

The spring equinox has passed, so light has the upper hand now. Darkness creeps away.

The plants in Shakerag Hollow know this and are starting to crack out of their winter shells. 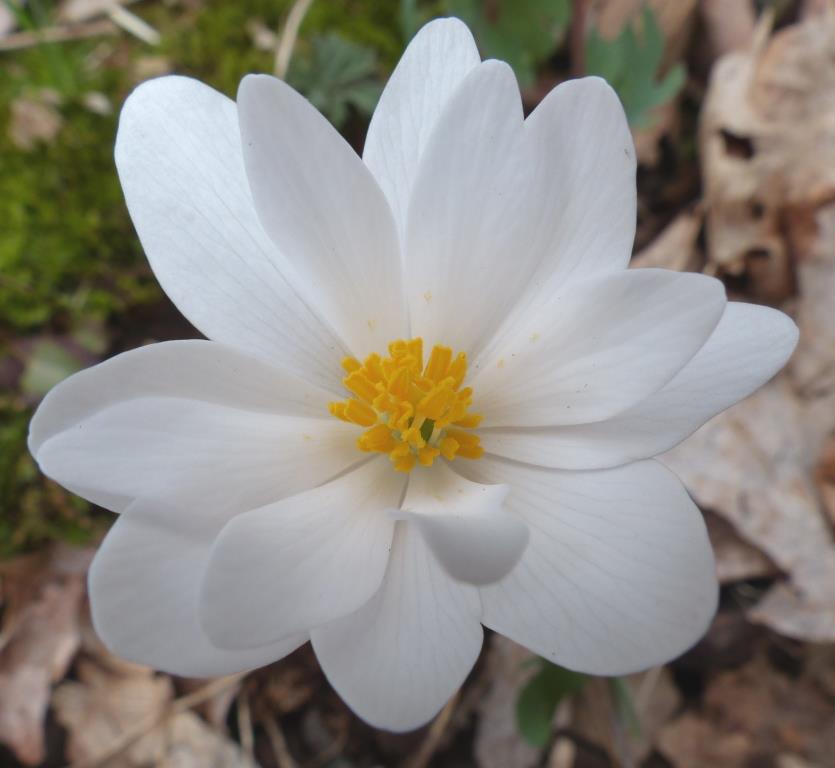 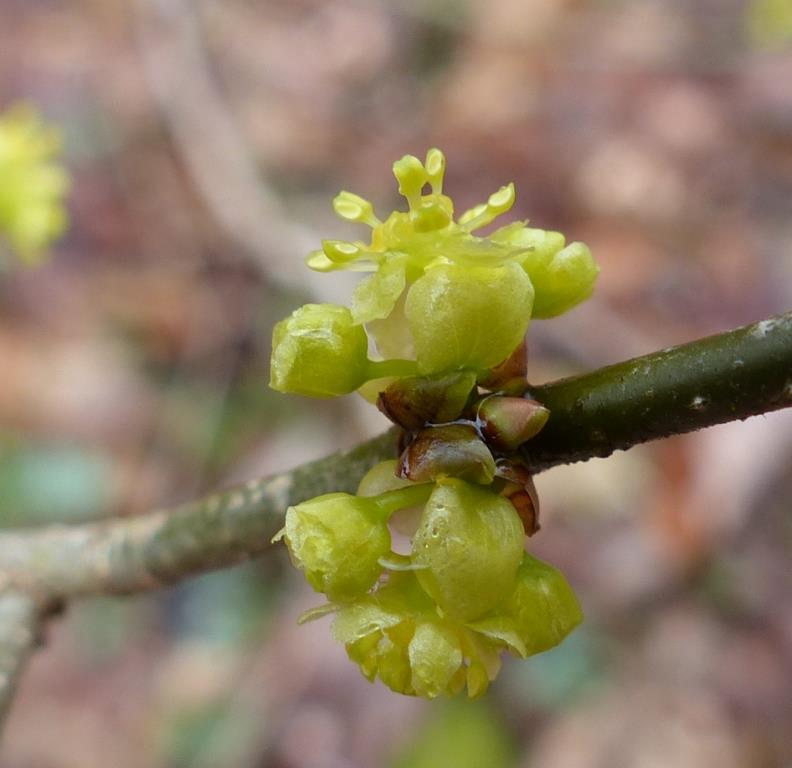 Spicebush: male flower. Spicebush is dioecious, meaning that each plant is either male or female with, no doubt, a few individuals that break the rules. 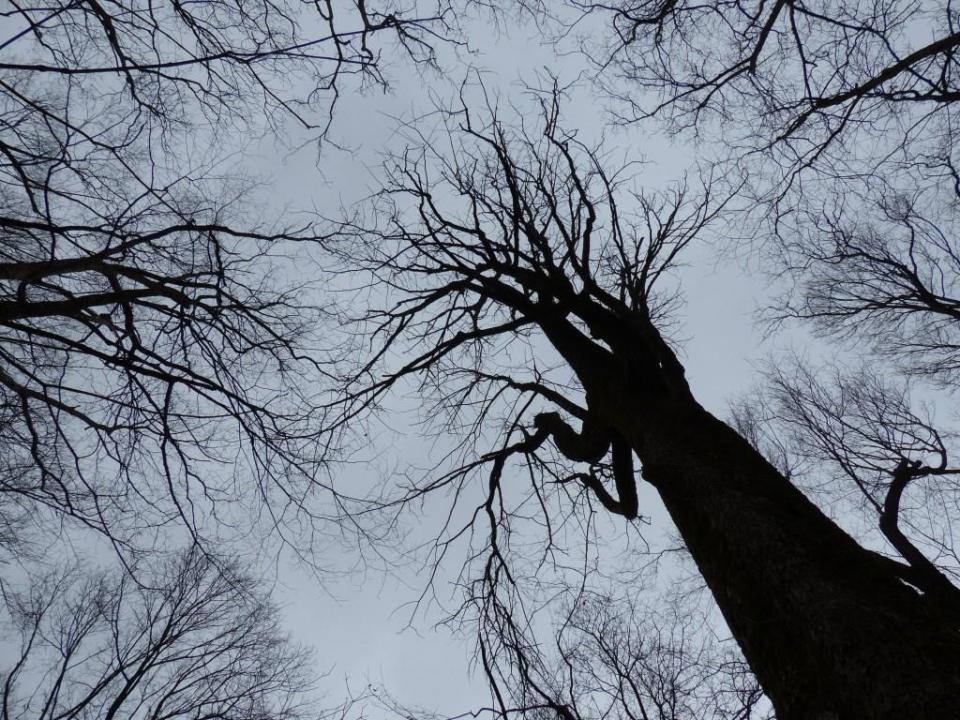 Above, the robber baron trees are constrained by their size and must delay leafing out until hard freezes are over. They keep Lent, it seems. The pagans below the canopy live under a different set of rules and hold a weeks-long herbaceous party.