On the edge of a mountain bog in Maine, a thumbnail-sized plant grows amid the mosses: 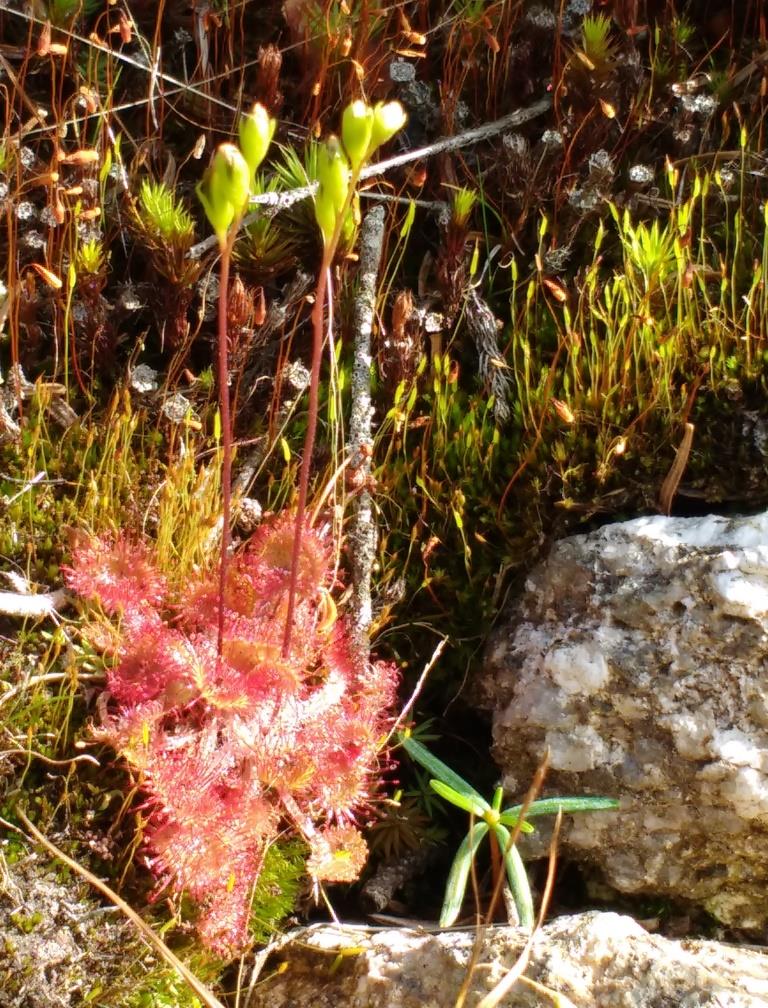 This is sundew, Drosera, a carnivorous plant, ready to ambush.

Darwin devoted twelve chapters of his 1875 book, Insectivorous Plants, to the anatomy, behavior, and physiology of a European species of Drosera. He writes:

During the summer of 1860, I was surprised by finding how large a number of insects were caught by the leaves of the common sun-dew (Drosera rotundifolia) on a heath in Sussex. I had heard that insects were thus caught, but knew nothing further on the subject… I gathered by chance a dozen plants, bearing fifty-six fully expanded leaves, … it was soon evident that Drosera was excellently adapted for the special purpose of catching insects, so that the subject seemed well worthy of investigation.

The results have proved highly remarkable; the more important ones being—firstly, the extraordinary sensitiveness of the glands to slight pressure and to minute doses of certain nitrogenous fluids, as shown by the movements of the so-called hairs or tentacles; secondly, the power possessed by the leaves of rendering soluble or digesting nitrogenous substances, and of afterwards absorbing them; thirdly, the changes which take place within the cells of the tentacles, when the glands are excited in various ways.

We now know that sundews are forced into a carnivorous mode of existence by the poor soils of the bogs in which they live. They are starved of nitrogen and, not being able to find any through their roots, resort to feasting on flying nitrogenous sources, aka insects. (If extra nitrogen is added to their roots, they back off from carnivory.) The “dew” on the plants’ leaves is sweet and sticky; the droplets lure and trap passing sugar-seekers. The plants’ movable hairs and leaves then draw their victims into the center of the rosette of leaves where glands digest then absorb the meal.

Insects also serve as pollinators of the sundew’s flowers. You’ll note that the flower stalks holding opening buds in the pictures above are very tall. Natural selection evidently says: don’t eat your pollinator for lunch.

My camera could not capture the full beauty of the sundew’s leaves. The following photo by “I, Petr Dlouhý” (generously shared under a Creative Commons license) gives a glimpse. The last thing a gnat sees before The End: