A very unusual visitor came to our bird feeder this morning: a male rusty blackbird. Although scattered flocks of them occur in the wet woodlands in the valley, this is the first one that I’ve seen in the Sewanee uplands. He ate some of the chickens’ corn, then took off.

Photo is by Blake Matheson, taken in California. From Flickr under Creative Commons Attribution-NonCommercial 2.0 Generic (CC BY-NC 2.0). Blake’s photostream: http://www.flickr.com/photos/34328261@N02  Rusty feather edges are seen in winter only. The males turn all glossy blue-green-black in the summer. Females are gray-brown. Both sexes have a pointed, slightly downcurved beak.

Rusty blackbirds nest in the far, far north, all the way to the tree line. They build large nests in trees alongside beaver ponds, muskeg swamps, and other watery habitats. The nests are so sturdy that other species, especially solitary sandpipers, like to use them in subsequent years.

Range of the rusty blackbird during June and July. Data are compiled from ebird.org. The darker purple indicates more frequent reports of birds.

In the winter, the birds flock in bottomland wetland forests in the southeast, sometimes mingling with larger flocks of grackles and red-winged blackbirds, but sometimes keeping to themselves. 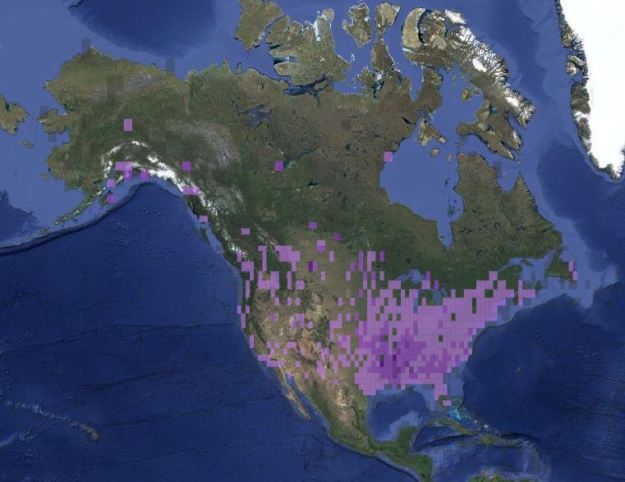 Range of the rusty blackbird during December to February. Data are compiled from ebird.org. Note the concentrations in the wetter lowlands.

Unfortunately, this species appears to be in free-fall. The available data show a 90% decline since the 1960s. The cause of these plummeting numbers is not fully understood. Changes in the availability of forests on either the summer or winter grounds could be part of the explanation. Northern forests are being increasingly logged and disturbed, and climate change is drying them out and causing more frequent fire. Acid rain and mercury are also significant problems in the north. Here in the south, hardwood forests are cleared for agriculture, housing, and pine plantations. But neither of these habitat trends seems severe enough to account for the decline. Some as yet unknown form of contamination or disease might be involved. Or the decline might be rooted in the supply of the rusty blackbirds’ favorite foods, grasshoppers and other insects.

All this bad news is made a little sadder by the recent death of Russ Greenberg, the ornithologist whose work brought to light and highlighted the plight of this species. Russ was brilliant, genial, hard-working, and inspiring. He was especially kind to greenhorn grad students like my younger self, generous sharing his time and insights. He also pioneered the study and promotion of the ecological benefits of shade-grown coffee, and made many contributions to our understanding of bird biology. Part of his legacy is a continent-wide effort within the academic and conservation community to better understand the rusty blackbird’s decline. If you’re a birder, I encourage you to stay tuned to ebird for news about the upcoming rusty blackbird “blitz” in the spring of 2014, a survey effort designed to learn more about their wintering grounds.

Much of the natural history information in this post comes from: