The coming wave of songbird migration has plants getting excited: finally they can get the kids out of the house before winter’s rigors set in. As thrushes, vireos and warblers move southward by the millions, their hunger creates an opportunity for seed dispersal that many plants have grabbed with enthusiasm. Look around in the late summer woods and you’ll see berries fattening up, preparing the bribe for passing birds. Bright red is the color of choice, the hue most likely to seduce an avian eye, so berries tend toward the garish, not the subtle blush.

We’re a few weeks away from the peak of migration (late September through early October brings the largest numbers), but the plants are ready. These eager food vendors include spicebush, dogwood, yellow Mandarin, Jack-in-the-pulpit, and Solomon’s plume. 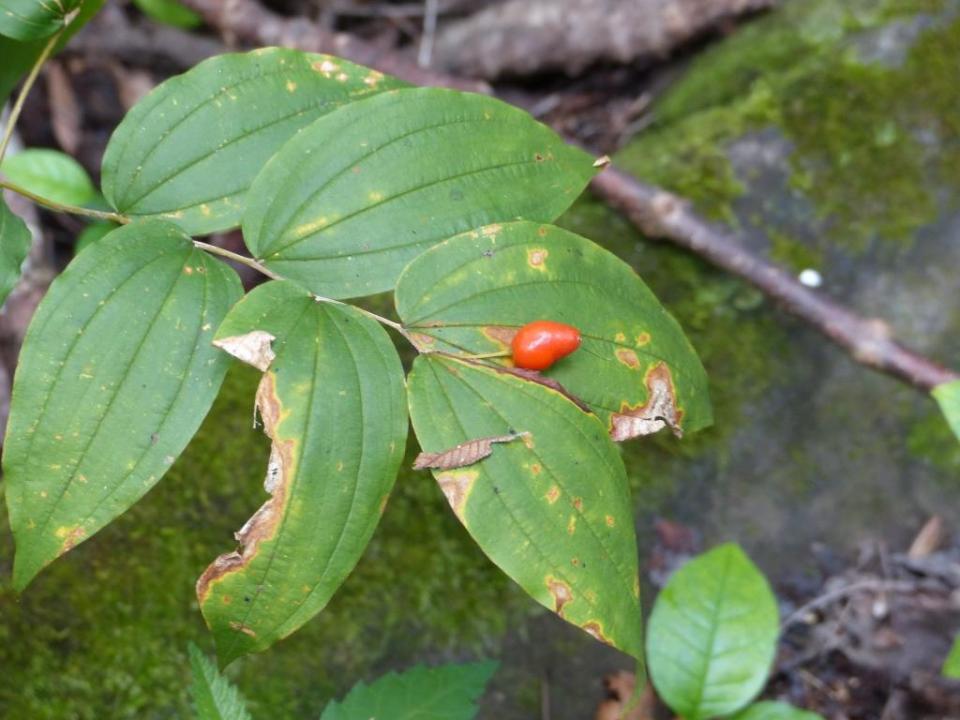 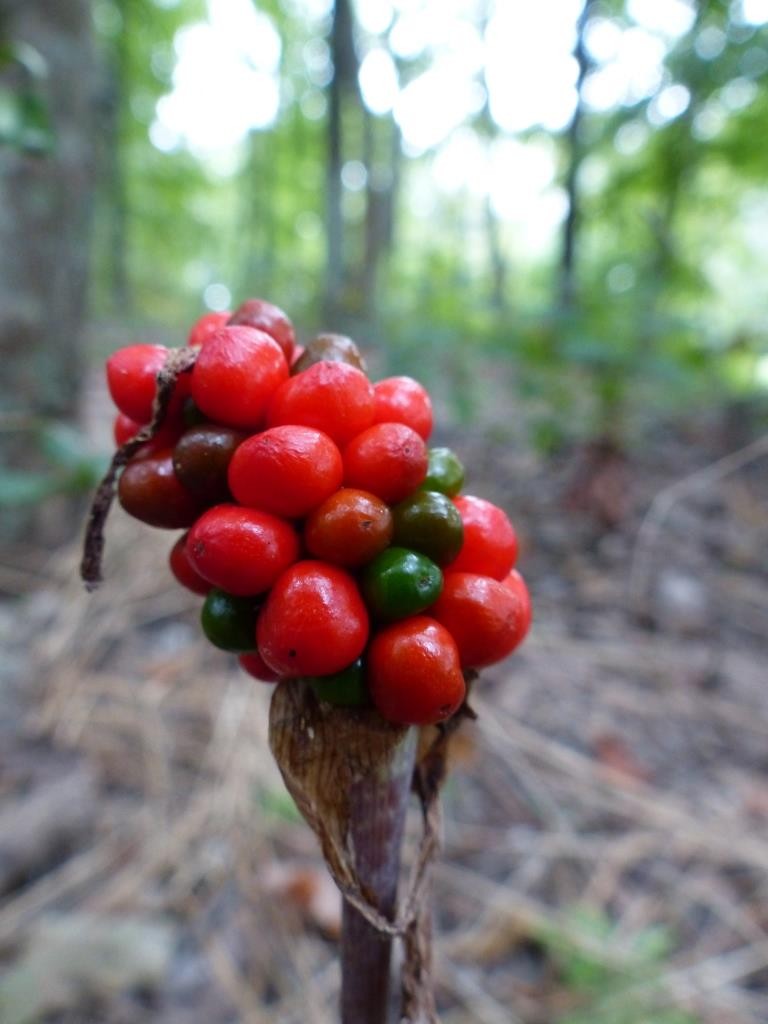 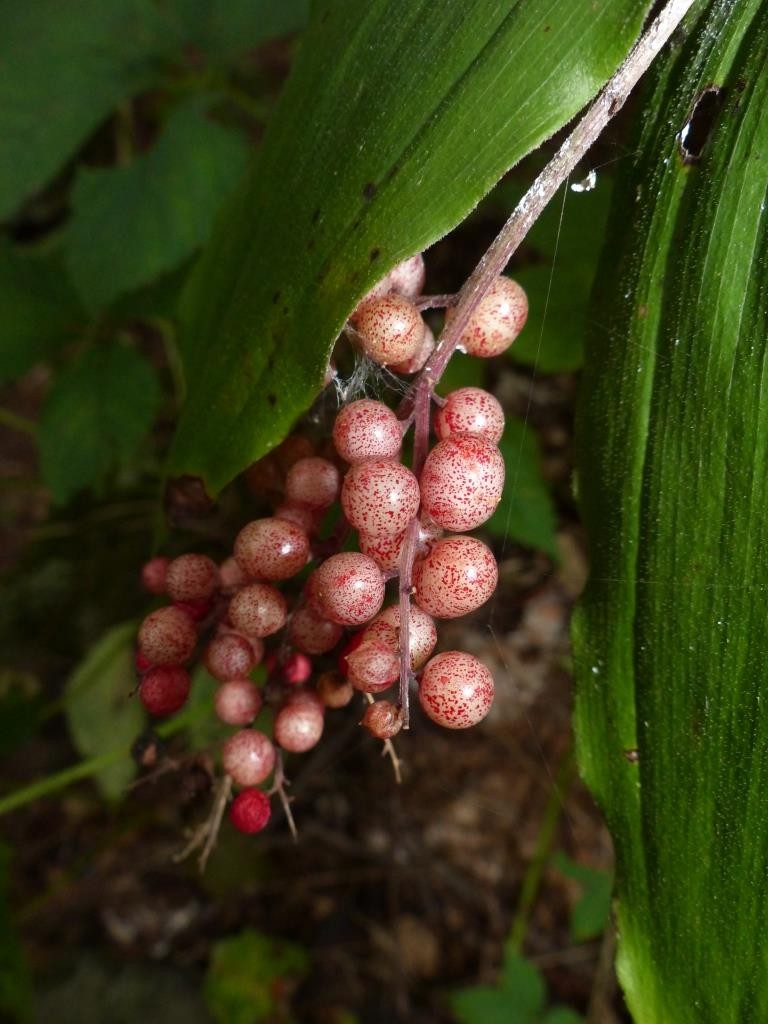 Yellow Mandarin has an interesting family tree. It has a few siblings in North America, but all its other close relatives are Asian species. This whole clan was for years classified in one genus, Disporum, but the North American species are now recognized as distinct enough to merit placement in their own genus, Prosartes. Solomon’s plume and Jack-in-the-pulpit also have close relatives in Asia. This Asia-America connection is echoed by the biogeography of many other species, especially among the plants of the Southern Appalachians which often have close affinities to species in East Asia. Boufford and Spongberg, scientists from the Harvard Herbaria, summarized the situation:

The similarities of the forests of Japan, central China, and the southern Appalachians in appearance as well as in ecological associations are in many instances so great that a sense of déjà vu is experienced by botanists by one of the regions visiting the other.

The list of Appalachian species with very close East Asian kin is long and, surprisingly, is much longer than the same list for plants with close kin in western North America. Japan is closer than Oregon, it seems. A few of the more familiar examples include: tuliptree, magnolia, dogwood, Virginia creeper, mayapple, ginseng, partridge-berry, blue cohosh, witch hazel, and honey locust. And, of course, the aptly-named “Mandarin.”

Donoghue and Smith’s analysis of this pattern concludes that close evolutionary connections between East Asian and Eastern North American species are “exceptionally common in plants, apparently more so than in animals.” Their work suggests that “many temperate forest plant groups originated and diversified within East Asia, followed by movement out of Asia at different times, but mostly during the last 30 million years.”

These botanical connections are reminders that Asian and American temperate forests were once connected, a connection that was severed as the world dried and cooled in the late Cenozoic. But it is also the result of a few long-distance dispersal events between climatically similar areas.

Animals move to the beat of a different biogeographic drummer. Their kinship patterns are more predictable: western and eastern North America share many close relatives, connections south to the tropics are also common.

So the migration of American birds is powered by Asian food. The botanical restauranteurs hope that the birds opt for the take-out option, carrying seeds away from the parental storefront. Most of these seeds will land a few meters from the parents, but a very small number might make a huge leap, perhaps landing in southern Mexico or on the coast of South America. There, they’ll likely perish. But the biogeographic future is written by the one or two that can put down roots and flourish.

The same is unfortunately true for plant diseases. A few long-distance migrants are reshaping the forests of the world. It is no accident that so many of the more notable plant-killing invasive diseases in the Southern Appalachians have their origins in Asia. Once they get over here they find a “home way from home,” minus the constraints that they experienced in their homeland.

I’ve rambled about the color red before, both here on the blog (“Quite possibly the most overused image of North American birdlife”) and in The Forest Unseen (“November 5th — Light”). I’ll note briefly here that until the leaves fall in a few weeks, the plants face an uphill battle against the physics of light in the forest. It is dark in the woods these days (photography is impossible without steadying the camera on my boot or using a flash). The summer tree leaf canopy is not only robbing most of the light, it is selectively stripping out the reds. Only when a shaft of sun sneaks through a canopy opening do these fruits truly shine. As autumn comes on, the botanical beacons will light up more often.

19 thoughts on “Red: A ticket outta here (for travelers that have already come a long, long way)”