Coasting down the hill on my bike, I turn my head and there it is, a dark angelic form, big as an eagle, soaring just off my left shoulder. We cruise together for a spell, then the bird banks away, the low sun laying a rosy tint on its black feathers. Ahead, hundreds circle low, turning the sky into a swimming confusion of slicing dark lines.

As dusk approaches, the vultures gather in tall pines and oaks around Sewanee’s downtown, clumping by the dozen on high branches. They settle slowly, restlessly hissing at new arrivals and flailing their huge wings at neighbors. With a start, the whole group startles into wheeling flight, then returns to roost with flustering feathers.

This roost formed last year in early winter, grew into a gathering of two to three hundred birds, then dissolved as spring wore on. This winter they are back. The talk in town often drifts their way. Why so many? Are they drawn to some hidden bounty of dead animals? Might a leaking gas pipeline be luring them? What danger do they pose?

I suspect that several factors have converged to bring us this spectacular daily display. One of these causes is the regional increase in vulture abundance. DDT’s effects are no longer felt by these birds, fewer people shoot them, and as deer and small mammal populations have increased, the vultures’ food has become more plentiful.

Wintertime abundance of Turkey and Black vultures. I constructed this graph from Christmas Bird Count data from Alabama, Tennessee, Georgia, and South Carolina. The graph shows populations since 1970.

In addition to this long-term trend, the record-breaking warmth of the last two winters also likely contributes to the recent increase in vultures in our area. Birds that previously would have flown to Florida or Mexico may have curtailed their migration. Why wing to Veracruz when you can dine on ‘possum and venison in a relatively balmy Tennessee or Georgia?

Local changes also play a role. Until last winter, the vultures were roosting here, but mostly out of sight in the valleys and mountain slopes. Why the move? We cannot know for sure, but it may be that these vultures have discovered that no-one harasses or shoots them here in town. It may also be slightly warmer. Like some other native animals, they have found that lingering near human habitation may bring benefits.

The vultures in town are gathering to sleep, not to feed. On all but the most dismal days they disperse every morning, surveying the surrounding countryside for food. They return to sleep in the safety of a group. Certainly any dead animal near the roost gets eaten promptly (a dead deer on the highway near town was snarfed within a couple of days), but feeding is not the purpose of this gathering. Nor can gas leaks explain the behavior. The birds are congregating away from the gas pipeline and show no attraction to any of the gas pumping stations in town.

Do the birds present a danger to humans or pets? My research indicates that dangers are few. If the roosts get larger and persist for many years, their fecal matter might accumulate and start to smell. These droppings are no more threatening than those of other birds; indeed vultures’ powerful guts probably kill more bacteria than the guts of other bird species. Temporary winter roosts present less of a problem in this regard than permanent roosts located further south (where some vultures have, in addition to depositing guano, turned into vandals). Another threat is unlikely, but memorable: vultures defend themselves by vomiting on their assailants, so it is possible that foolhardy hazers of the roost might get an unpleasant (and potentially bacteria-laden) shower. This outcome can be avoided with some common sense. Don’t climb roost trees. And remember the ornithologists’ Golden Rule: keep your mouth shut when you look up. 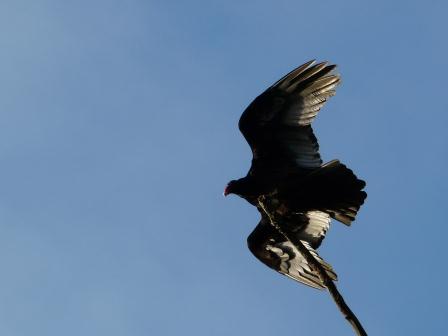 Of all the species that I researched for The Forest Unseen, vultures were perhaps the one that most changed my everyday experience. I see them many times each day, yet until I knew just how fabulous they are at purging the land of dead animals, my appreciation for their lives was far too limited. No other animal removes carrion with such unassuming efficacy. A vulture gut will kill anthrax and other bacteria, a feat that no other scavenger can match. The near extinction of vultures in India has underscored their importance. As vultures declined, the populations of other scavengers surged, leading to a plague of feral dogs and rabies (and problems for people who use vultures for funerary purposes).

Being followed on my bike by a death-eating scavenger was, therefore, an unexpected delight. The dark forms that soar overhead or sit hunched in tall oak trees are to be admired. Their easy, loping wingbeats are beautiful memento mori, sky burials for the thousands of animals that live and die on this mountain. Like living prayer flags, their presence delivers a very real ecological blessing on the land below.

23 thoughts on “Why so many vultures?”