My Ornithology class had some great views of bald eagles this week near Woods Reservoir. 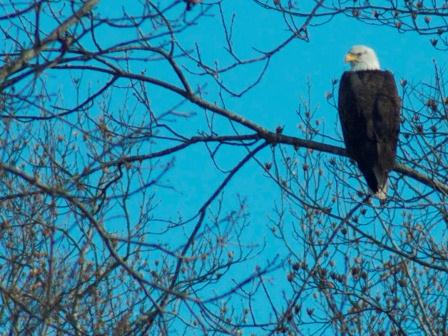 In addition to two adults, we saw a couple of young eagles circling overhead.

The two adults were nesting: one sat in the nest and one stood close by in the tree. Until recently, such a sight would have been very rare in Tennessee. In 1990, only sixteen nests were known in the whole state. Now, there are at least one hundred and seventy five nesting pairs of eagles in Tennessee.

The population increase in Tennessee is part of a nationwide trend. After decades of decline caused by shootings and poisonings (encouraged by bounties), followed by the impacts of DDT, bald eagle populations have edged higher year-by-year since the 1970s. In 2007 the species was removed from the federal list of threatened and endangered species, although it (and its cousin, the golden eagle) remain protected by other laws.

Bald eagle nests are huge: brush piles crammed into the crowns of high trees. Nest-building can take up to three months, although when pressed the birds can slap something together in a few days. Most clutches have just two eggs (a few have one or three). Both male and female incubate the eggs, although the female does most of this work. Between them, the parents keep the eggs covered by a warm body for 98% of the time. Eagles are relatively heavy and they have sharp claws, so the parents take extreme care in the nest, walking around the eggs with clenched feet.

The incubation period lasts 35 days; the young leave the nest two to three months after hatching. These young birds stay with the parents for a variable period, from a couple of weeks to several months, then set off on an extended period of wandering. During this unsettled stage they have no fixed territory but move around, presumably seeking food and, later, mates and a good place to nest. The immature birds at Woods Reservoir are likely in this wandering stage.

The return of nesting eagles to the U. S. has intersected with the internet age to produce a new phenomenon: the eagle cam. You can now follow the adventures of nesting eagles from your computer, an activity that is usually considerably more compelling than working through your email inbox. So, be warned, there is a reason why some of these websites get millions of viewers… Here is one in Florida with two eaglets (hatched back in early January).