The city of Edinburgh is overlooked by the cooled remnants of ancient volcanoes. The most famous of these fiery landmarks is Arthur’s Seat, the highest point in the city and a popular place from which take in the view (and the wind) after a vigorous climb. The dome of Arthur’s Seat was formed from the inner “pipe” of a volcano, the central conduit through which molten rock rose. The rest of the volcano has, over about three hundred and fifty million years, eroded away. 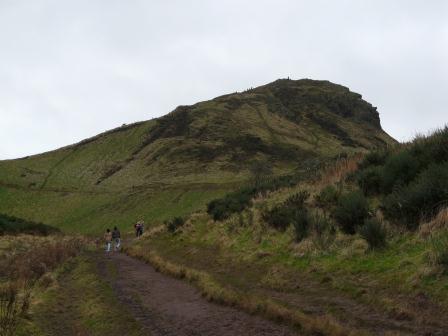 Arthur’s Seat, viewed from one of many well-worn access trails. The origin of the name, including the identify of “Arthur,” is unknown. 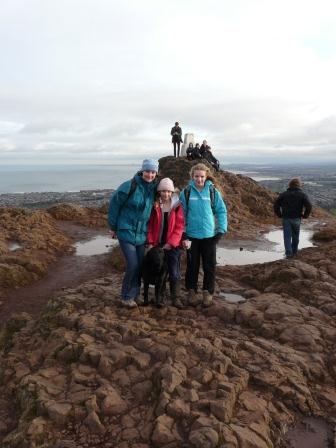 Next to Arthur’s Seat, facing Edinburgh castle (itself perched on volcanic rock, one of the vents from Arthur), an escarpment curves around, presenting an impressive cliff line to the city. These are the Salisbury Crags: cliffs that contain some of the most famous rocks in the world. 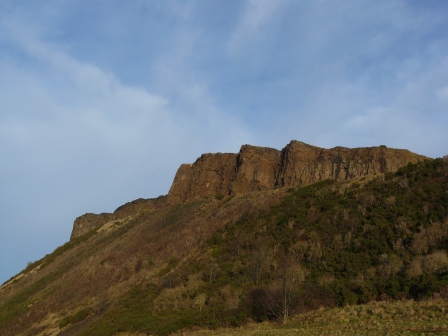 Salisbury Crags, viewed from the southeast.

It was on the Salisbury Crags that James Hutton, the Scot whose work founded the modern science of geology, saw evidence to refute the “Neptunian” view that rocks had been recently deposited as sediments in a catastrophic flood. Hutton’s views inspired Charles Lyell who in turn strongly influenced Darwin. So the Salisbury Crags are also foundation stones for modern biology.

In the crags, Hutton saw flows of magma crunching into sedimentary rock (magma is molten rock; lava is the above-ground manifestation of magma). The sedimentary rocks were formed in an ocean, but the magma was not; it came from a volcano then flowed into (and distorted) the other rocks. Here, then, was evidence that the world’s geology could not be explained by catastrophist, diluvian processes. Instead, these rocks (and unconformities from elsewhere in Scotland) showed Hutton that the world was very old and that ongoing interaction between processes like vulcanism, sedimentation, and erosion could explain how the physical features of the world came to be.

In Theory of the Earth (1795) Hutton writes (with my explanatory additions in square brackets):

the whin-stone [rock formed from magma/lava] is interjected in form of strata, having various degrees of regularity, and being of different thickness. On the south side of Edinburgh, I have seen, in little more than the space of a mile from east to west, nine or ten masses of whin-stone interjected among the [sedimentary] strata. These masses of whin-stone are from three or four to an hundred feet thick, running parallel in planes inclined to the horizon, and forming with it an angle of about twenty or thirty degrees, as may be seen at all times in the hill of Salisbury Craggs.

…these masses, which have flowed by means of heat among the strata of the globe…[are] subterraneous lavas, as they may be termed.

This view is confirmed by present-day geologists. The crags are a sill (a sheet of igneous rock intruded between sedimentary layers) that formed when magma flowed out into the oceans, pushing into sedimentary layers.

For good measure, here is the most famous passage from this book. Hutton emphasizes a uniformitarian worldview: nature operates according to a system of rules and these rules are consistent across time and space. He makes an analogy to the law-like motion of the planets (as would Darwin, many decades later, in the concluding paragraphs of The Origin) and ascribes the operation of the physical world to these natural laws, not to higher causes. We now know that his famous “no vestige of a beginning, no prospect of an end” is not true, at least as far as the Earth is concerned. But the rest of his vision still stands.

We have now got to the end of our reasoning; we have no data further to conclude immediately from that which actually is: But we have got enough; we have the satisfaction to find, that in nature there is wisdom, system, and consistency. For having, in the natural history of this earth, seen a succession of worlds, we may from this conclude that there is a system in nature; in like manner as, from seeing revolutions of the planets, it is concluded, that there is a system by which they are intended to continue those revolutions. But if the succession of worlds is established in the system of nature, it is in vain to look for any thing higher in the origin of the earth. The result, therefore, of this physical inquiry is, that we find no vestige of a beginning,—no prospect of an end. 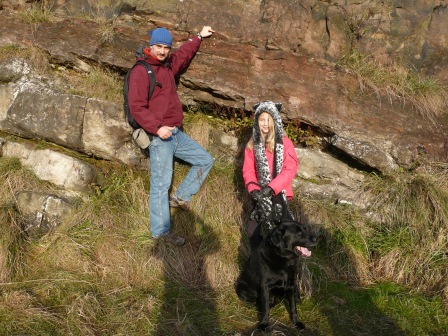 I’m pointing to the point of contact between the two rock types. I’m ably assisted by Rocky (a geological dog) and Kathy who sports her new snow leopard headgear.

Edinburgh’s growth and the industrial revolution created a market for the crags’ cooled magma, dolerite. The hard rock was used for paving streets, including some as far away as London. Quarrying activities on the crags removed large quantities of rock, but Hutton convinced the operators to leave one small rock with a particularly good example of a hematite seam (formed by hydrothermal venting into the rock). So Hutton not only founded modern geology, but enacted the first conservation program for significant geological formations. The rock stands to this day. 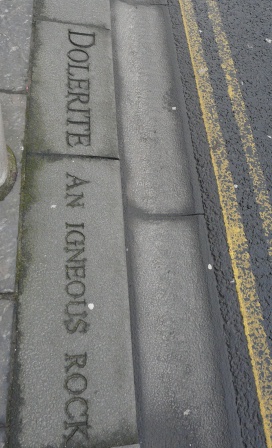 Some of Edinburgh’s streets are lined and paved with dolerite. This example (outside the Scottish Parliament) may be the world’s only example of a street gutter with mineralogical engraving.

Hutton’s Rock, being closely observed by Edinburgh’s next generation. The rock marks the original front wall of the cliff. The quarry pushed this wall back to the location seen behind. Arthur’s Seat rises in the background. 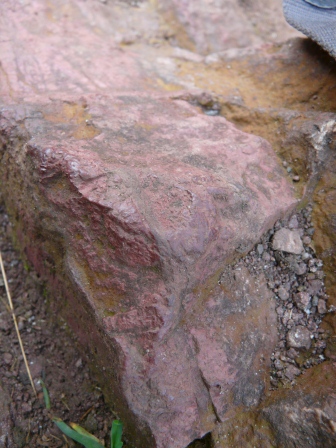 Hematite seam running through the middle of Hutton’s Rock. It is worn smooth by the many tourists who clamber over the rock each day.

Remarkably, no signage notes (or protects) these treasures of our shared intellectual heritage. Tourists walk past ignorant of the fact that they are passing the Newtownian Apple, the Darwinian Galapagos, and the Archimedes’ Bath of Geology. Bouldering hands have chalked up nearby rock faces. Hammers have chipped at some exposed areas, including a portion of Hutton’s Rock. In hindsight, I feel bad for sitting on the famous rock, adding my little bit of buttock-polishing to the well-rubbed patina. The whole area is officially a designated Site of Special Scientific Interest, but this has not resulted in any on-site signage. Surely a place that tore apart a befuddled worldview and launched one or more new scientific disciplines deserves more than a “Beware” sign? 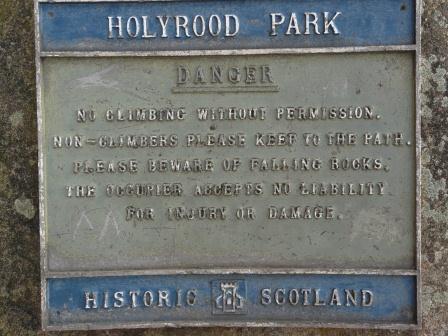 Danger — Enlightenment may strike and spread across Europe. It happened once; it could happen again. So think with care.

The crags also host some biological gems. Peregrine falcons patrol the cliff faces. Fulmars nest on precarious rock ledges: these are birds of the wild North Atlantic, yet here they are at the center of a major European city. 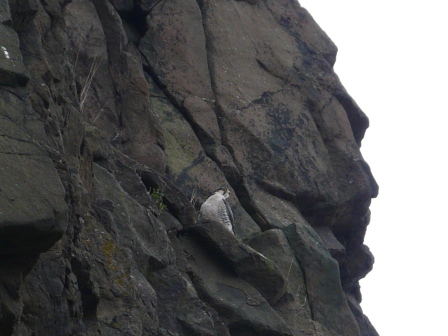 This peregrine flew past, sending pigeons swirling away. 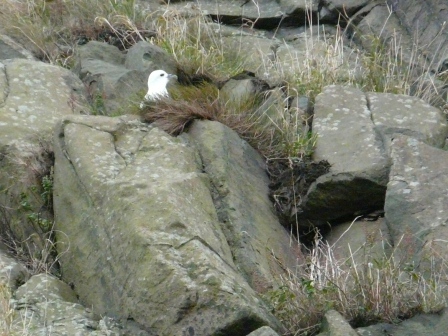 Northern Fulmar, getting its nesting area ready for spring. The bird is lodged way up a cliff. Any mammal skilled enough to climb up there will be rewarded with a face-full of vomited fish oil. Welcome to Edinburgh, laddies and lassies. Fulmars are related to albatrosses, soaring birds of the wind-blown oceans. 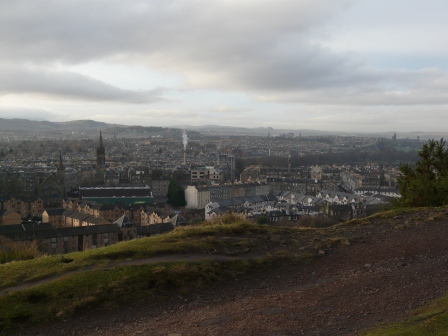 The view from Hutton’s Rock: Edinburgh.

[Thanks to Chris Clinkscales for comments that clarified the magma/lava terminology in this post and for insights into geological mechanisms — see comments section below.]

23 thoughts on “The Newtownian Apple, the Darwinian Galapagos, and the Archimedes’ Bath of Geology.”