The Sunday “Perspectives” section of the Chattanooga Times Free Press is running my column about Rachel Carson, along with a column about the politics of conservation by David Yarnold, president of the National Audubon Society. The layout is beautiful — I was expecting an unadorned column, but this morning I opened the paper to find a spread with Carson framed by bird sketches. 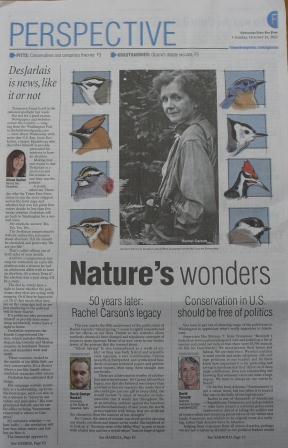 The columns are not online, so I can’t redirect you to the paper itself. I retain copyright, so I’ve reprinted my column below.

This year marks the fiftieth anniversary of the publication of Rachel Caron’s Silent Spring. Carson is rightly remembered for her effects on our lives. Thanks to her, attitudes about synthetic chemicals have changed and regulatory oversight of toxins is more rigorous. Many of us now carry in our bodies fewer of the poisons that she warned about. Silent Spring is also remembered as a work of art. Her writing was both lyrical and scientifically rigorous, a rare combination. Carson unearthed, interpreted, and synthesized hundreds of arcane technical papers and government reports, then sung them straight into our hearts.

These are achievements worthy of celebration and remembrance. Yet Carson left another legacy, one that she believed was deeper than activism or literary mastery. She wrote that if she could give just one gift to every child, she would bestow “a sense of wonder so indestructible that it would last throughout life, as an unfailing antidote against the boredom and disenchantments of later years, the sterile preoccupation with things that are artificial, the alienation from the sources of our strength.”

For Carson, this sense of wonder was developed by opening our minds, emotions, and senses to the world. She implored us to look up at “the misty river of the Milky Way,” to peer at moss with a hand lens and see a world where “insects large as tigers prowl amid strangely formed, luxuriant trees,” to attend to our noses and “savor the smell of low tide,” and to hear in the dawn chorus of birds “the wild medley of voices . . . the throb of life itself.”

Carson established her reputation with books that celebrated the biological and physical marvels of the world: periwinkles, sea weeds, eels, and ocean currents. She lifted the study of natural history from the quiet, dusty parlors of the Victorian age and made it relevant for her generation, becoming, in her own words, a creator of a “new type of literature . . . representative of our own day.” In Silent Spring, she took this further and used the testimony of natural history — robins, earthworms, plankton, caterpillars, and cells under microscopes — to make her case against the imprudent use of chemicals. So although Silent Spring is remembered for bearing fruit in legislatures and regulatory offices, it was rooted in Carson’s life as a naturalist.

For Carson, the practice of natural history was a source of both delight and profound moral significance. Even at her most polemical, when delivering a speech on pollution to medical professionals as she was dying of cancer, her arguments were grounded in stories about the evolution and ecology of our world. Her speech was not focused on policy recommendations or the details of toxicology. Rather, she opens with a discussion of the origin and evolution of ecosystems, then closes with Charles Darwin. Where in today’s environmental discourse do we hear such zeal for the unfolding drama of evolution?

Carson’s references to biological context were not merely rhetorical window-dressings. The fact of our kinship with the rest of life was the foundation of her worldview; the joyous study of the particularities of the natural world was the ground from which her activism grew. In poisoning the world, she believed, we poison ourselves, for there is no separation between nature and mankind. And there can be no wise decisions about “our true relationship to our environment” without intellectual and emotional connection to the community of life. Darwin taught us that we are kin to the rest of life; Carson taught us that this kinship leads to empathy and responsibility.

So, how to celebrate, honor, and carry forward the insights of Silent Spring? Use synthetic chemicals with care and caution? Of course. Engage with the political process? Yes. But most of all, I think Rachel Carson would want us to take up “the creed I have lived by . . . a preoccupation with the wonder and the beauty of the earth.”

Is this preoccupation with the study of nature naïve or outmoded? No. Carson’s call is all the more pressing today. Biological diversity is plummeting worldwide and our climate is dangerously destabilized. Yet mere abstract knowledge of these trends is not enough. Without emotional and aesthetic connection to the natural world, we’re dislocated from any reason for action.

So our homework assignment from Carson, fifty years after Silent Spring, is to get to know a tree, to listen to a bird and to smell the beauty of soil. By giving our attention to the ecology of our homes, we’ll find Carson’s most important legacy: wonder.

David George Haskell is the author of The Forest Unseen: A Year’s Watch in Nature (Viking 2012). He is a Professor of Biology at the University of the South in Sewanee, TN.