Hill Craddock and Tom Saielli visited Sewanee today with four hybrid chestnut trees to plant in our forest. Hill is in the Biology Department at UT Chattanooga and has worked for many years on American chestnut breeding and restoration; Tom is the Southern Regional Science Coordinator for the American Chestnut Foundation.

Photo credit for this photo and all others in this post: Buck Butler. Thank you, Buck!

Some backstory: the American chestnut (Castanea dentata) was formerly one of the dominant trees in our region, comprising half of all the trees in many forests. In some places the species grew in pure stands, a fact that is commemorated in many place names (Chestnut Ridge, Chestnut Hollow, etc). Chestnuts produced annual crops of tasty nuts and many animals depended on this massive burst of autumnal nutrition to make it through the year. In the late 1800s a fungus (Cryphonectria parasitica, an ascomycete) came into the U.S. on trees (of another chestnut species) imported from Japan. The fungus spread from the New York City area across the entire Eastern U.S., wiping out chestnuts as it went. From about 1900 to 1940, almost every tree was killed. The ecology of our forests was forever changed; other trees increased in abundance and many animal populations undoubtedly declined significantly due to the loss of the chestnut crop. These changes took place at the same time as the forest was being hit hard by unsustainable logging and grazing, so these were not happy decades for woodlands.

These days, the chestnut survives in the wild mostly as scattered small trees that grow for a few years, then get knocked back to their roots by the fungus. The fungus also infects scarlet oak, an unfortunate state of affairs because scarlet oak now acts as a continual reservoir of spore-producing fungus ready to attack chestnut saplings. A few large trees survive, either through luck or through the presence of a fungus-weakening virus that keeps the infection in check. But in the big ecological picture, the tree is functionally extinct.

All may not be lost. For many years now, scientists have been crossing the American chestnut (obtaining pollen and nuts from a few survivors) with the Chinese chestnut, a different species that is more resistant to the fungus. The resulting hybrids are indeed resistant to the fungus, but they have many characteristics of the Chinese parent that make them unsuitable for becoming true ecological “substitutes” for our lost Americans (e.g., their growth form is more bushy, they are more vulnerable to late freezes, etc). So, these hybrids (F1s, in biological lingo) are back-crossed to the American chestnuts for several generations (summarized here). These crosses produce plants that are nearly all American, with a few Chinese genes thrown in. The important step is then to pick out the offspring of these back-crosses that are truly disease resistant. This is where the trip to Sewanee comes in. Only by placing thousands of back-crossed seedlings in the forests, then testing them for disease resistance, can we ascertain which trees have inherited the right combination of genes.

So today we planted four seedlings in an area that had previously been cleared of planted pine. We hope in the future to establish a larger test area with hundreds of seedlings. The seedlings today were B3s — meaning that they are the result of three generations of back-crosses. 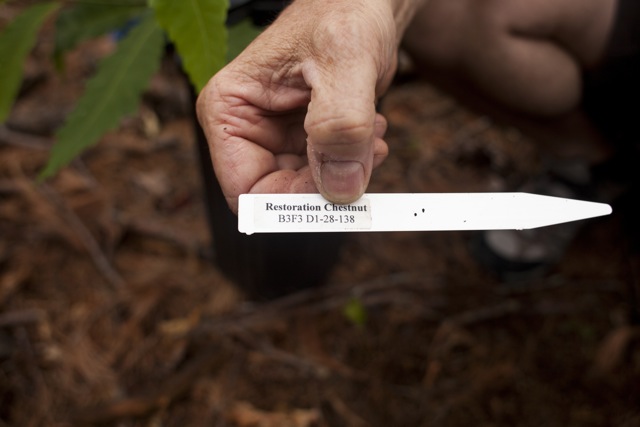 I’ll close with thanks to my colleagues Nate Wilson and Ken Smith who arranged for this visit and planting, and to Hill (in the green shirt above) and Tom for sharing their plants, their expertise, and their good cheer. 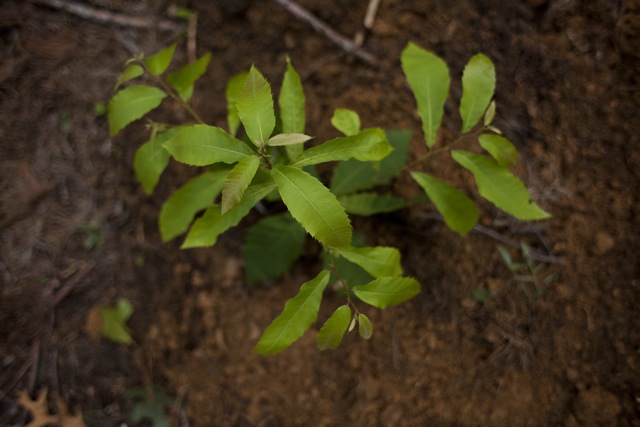 3 thoughts on ““Under the spreading chestnut tree…” (via telescreen)”