Jeff Heitzenrater sent me these photographs of a red fox mother and her kits (Vulpes vulpes). The foxes had little fear of humans and played openly even as Jeff approached with the camera. They were denning near his house, but have now grown up and moved on. The family group will stay together until late summer or autumn. At first I thought that this must be a gray fox — the tip of the tail seems to be dark, a distinguishing characteristic of the gray fox (red foxes have white tips). But the actual tail tip is hidden in the photos. The shape of the face (narrow muzzle, with large ears), the dark legs, the white wash that extends up the belly to the throat, and the bushiness of the tail all indicate that this is a red fox. If blog viewers have other ideas, please don’t hold back on correcting me in the comments section. In Sewanee, gray foxes are more common (they are woodland creatures) but red foxes do occur here and are fairly common in the valley. The red fox is the most widely distributed canid in the world, occurring on five continents. [update added later: Jeff has now sent me another photo (last one below) that clearly shows the white tail tip] 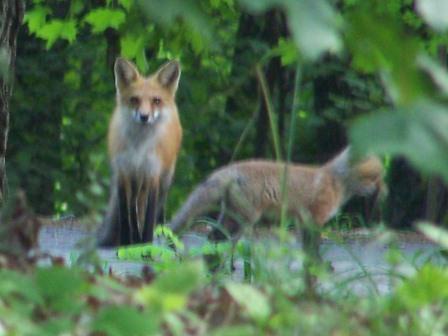 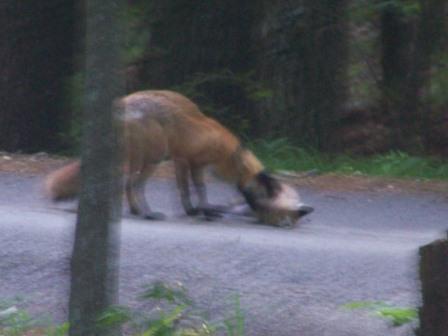