I ran into a small cluster of Showy Skullcap, Scutellaria pseudoserrata, on the trail that winds through a dry upland oak forest in Sewanee (for local readers: the perimeter trail, north of the memorial cross). This wildflower grows about a foot fall and has pearly-purple flowers at the top of a slender stem. It was the only herbaceous plant in bloom under the forest canopy. The dry upland woods don’t support the profusion of flowers found in the moist coves, so the these skullcap flowers are visually striking in the otherwise green understory. 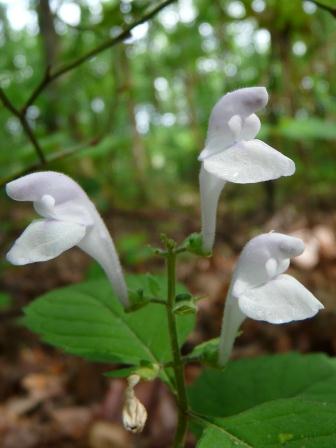 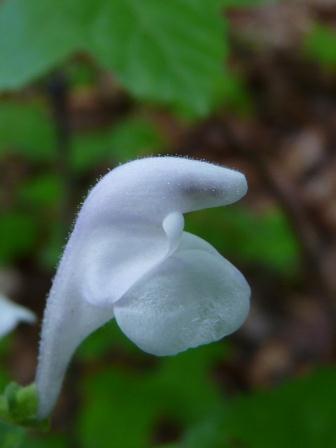 The tube leading from the lip of the flower down to the nectar the flower’s base is very long, excluding all but the longest-tongued bees and moths. Keeping the nectar relatively inaccessible saves the plant from giving nectar to insects that are poor pollinators (e.g., ants), but it also means that in many years no pollination takes place at all. In the closely related large-flowered skullcap (S. montana), a study by Mitchell Cruzan from the University of Tennessee reported that “several hundred hours of observation over four seasons suggest that these pollinators may be rare or lacking.” Most flowers either produce no seeds, or self-pollinate. This seems like a dreadfully slow way of propagating the species, but these plants are perennial, coming back year after year, so they don’t have to spew thousands of seeds into the world each year to pass along their genetic legacy. A more open flower might attract more insects, but the costs of such a flower design (wasted nectar and visits from insects that will not visit another skullcap) may outweigh the benefits. Or, an undocumented decline in the local moth and bee populations has left this species high and dry. No way to know for sure.

[Thanks to Mary Priestley and Jon Evans for helping me sort out the difference between pseudoserrata and montana. The latter is found just to our east and has leaves with velvety short hairs all over its upper surface. The species is listed as “threatened” by the USFWS.]

Further along the trail, out of the woods in a tumble of rocks on the cliff edge, I found another showy flower, the Roundleaf Catchfly, Silene rotundifolia. This species’ leaves and petals are covered with sticky secretions that snare wandering insects, keeping them away from the flowers’ nectar. This stickiness also catches crud and dust, giving the plant an untidy, unwashed appearance. My Horn et al. wildflower book (an excellent guide in almost every way) tells me that “flying insects” are the pollinators, but I doubt that. The bright red flowers, splayed open and pointing skyward, strongly suggest that hummingbirds are what the plant seeks. A quick search on the web confirmed this suspicion, at least for the look-alike Silene virginica.

2 thoughts on “Skullcap and Catchfly”