The Pike Place market in Seattle is piled high with seafood, especially seafood from the Pacific. The smell and the look of it make me mighty hungry, like a bear that needs to fatten up on the flesh of salmon. Part of the hunger is for the sea itself, I think. After all, we came from the sea and every cell in our bodies carries the salty water inside, an ionic memory of our ancestry.

So, do we, also, go well with butter and lemon?

Fishes are not the only ocean creatures on display. Invertebrates, especially my friends the molluscs, were also abundantly displayed, some pre-cooked (crabs), some just plain ol’ dead (squid, octopus), and others awaiting the future tucked into their shells (clams).

The abundance on display in the fish market belies the state of our oceans. The seas are thinner, diminished. Large predatory fish are down 80% compared to the days before industrial fishing. We take so much from the oceans that we’ve become an evolutionary force, changing the genetic code of fishes. Massive “by-catch” of seabirds threatens the survival of a large fraction of these species. The red snappers in the slideshow above are a good example — many of their populations are a disaster of bad management. These days, much “red snapper” in stores is actually some other species, mislabeled as snapper, thus hiding the truth from us hungry bears.

To be fair to the Pike Place folks, much of their seafood comes from Alaska, where fisheries are generally well-managed. And, more and more people care, leading to the following sign over one stall. Hope is the thing with fins. 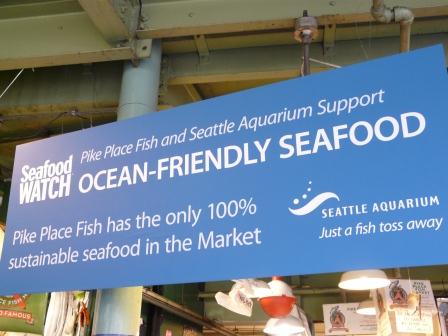