Our search for the mini-creatures of the world also turned up some interesting macro-organisms. Spend a few hours in the woods with a bunch of biologists and you’ll see a good array of remarkable critters. Here is a selection.

Zigzag salamander (Plethodon dorsalis/ventralis -- can't tell which without a DNA-o-tron), found under a limestone slab. This species is strongly associated with karst limestone, especially along streams and near springs. The females lay their eggs in caves and brood the eggs until they hatch. These are long, skinny salamanders, like pencils. 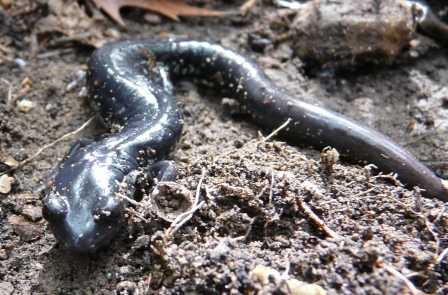 Slimy salamander (Plethodon glutinosus), also found under a rock. Black with silver spots: beautiful. When handled, they produce gluey defensive slime that gums up your fingers.

...and slimy makes her escape

Box turtle (Terrapene carolina) shell. The colored plates are made from keratin, the same material as our hair and fingernails.

The same turtle shell seen from below. The animal’s spine is visible and, above that, the carapace which is made from fused ribs combined with dermal bone. So, evolution has flipped the ribs of turtles onto their backs and fused them into a solid plate.

The tail of a spotted salamander...evidently a raccoon or some other predator ate well. We found spotted salamander eggs in a nearby pool, so life goes on, the torch has been passed, etc, etc ...fill in your own favorite death-surmounting cliche here... 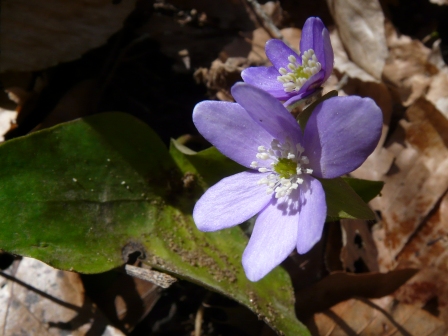 Hepatica nobilis. Most Hepatica here are white or pale purple. This one was unashamedly ultra-purple. Yeah, the torch got passed to this one alright.

A nematomorph, also called a “horsehair worm.” These are parasites inside the bodies of insects. When the worm is ready to exit, it causes its host to jump suicidally into water, then the worm rips open the insect and emerges. These lovely critters feature in the first chapter of my book, The Forest Unseen -- nematomorphs surely embody one pole of nature’s range of cooperation and conflict.