One of the few advantages of spending time in airports and train stations is the opportunity these places afford for watching people. Several years ago, Radio Lab ran a piece on how walking speed scales with the size of cities. Apparently, people walk faster in larger cities.

I timed how long it took people to walk twenty paces at my various stops:

The "Leisurely Stride Index" calculated as an average of twenty people at each of five cities.

Evidently, there are some differences among cities (although the statistical rigor of this test is weak, to say the least).

But, the graphs below show that city size seems to have no correlation with walking speed. Latitude does: people in southern cities, especially the two southernmost in my sample, Nashville and Washington DC, walk with a more leisurely pace. 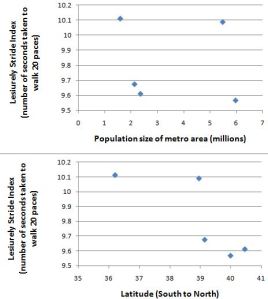 I suspect that Atlanta would blow this hypothesis out of the water. My few experiences in the airport there have not been conducive to leisurely strides.