The Labrador Current carries water from northern Greenland down the Canadian coast, then swirls its iciness into the Gulf of Maine. On the Maine shore, waiting for the splash, are common eider ducklings:

…whee that was fun, can we go swim now?

In the surf, the downy balls have no trouble. As a breaker approaches, they dive then pop back to the surface, paddling in the sea spume and froth. 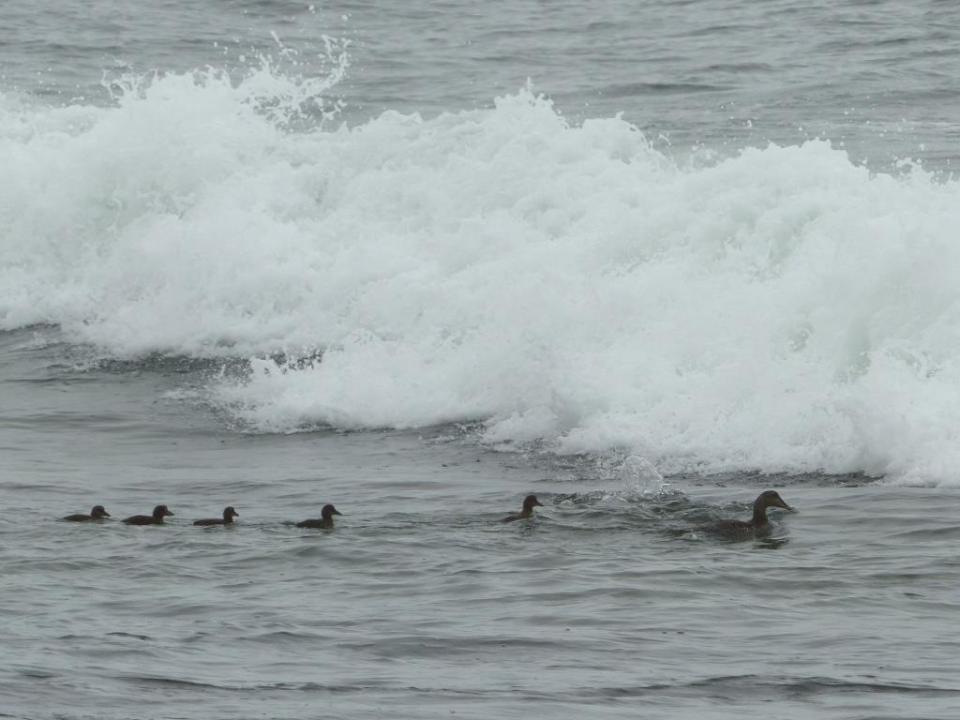 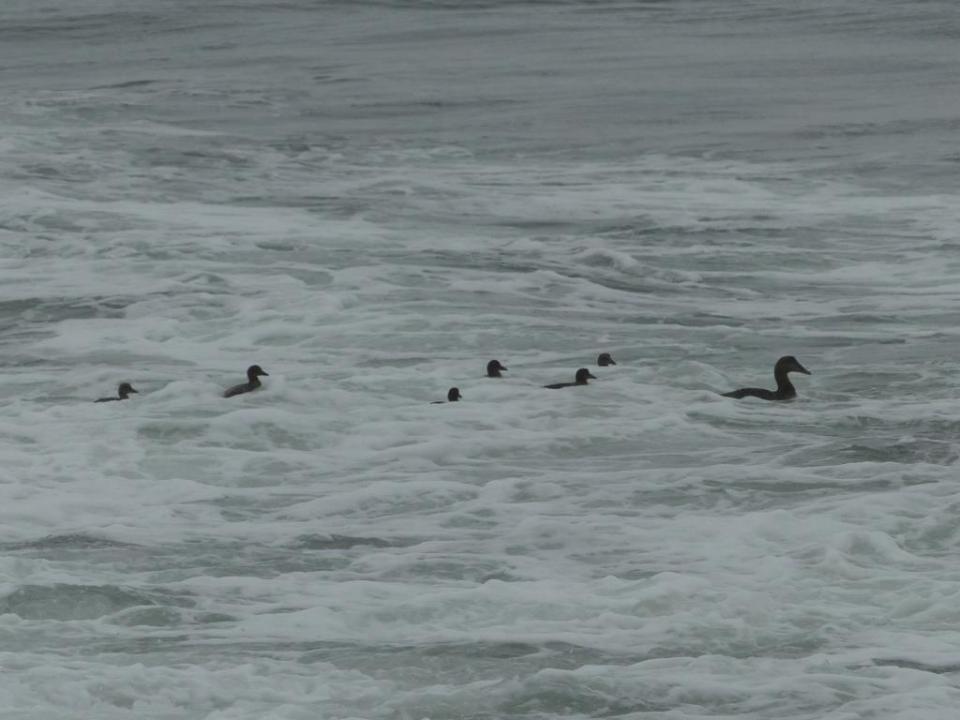 When they hatch the ducklings weigh just 70 grams. After ten weeks of growth those that have not been eaten by gulls and seals are nearly as heavy as adults, about 1600 grams. They accomplish all this while keeping their bodies at 40°C (104°F) despite the frigid water (10°C, 50°F on a good day in the early summer). Their diet must therefore be rich in protein and fat — crustaceans, and other sea animals — and their eiderdown coats tight.

Small avian endotherms have no trouble with the water. Surely I should take a dip and join them?

I lasted a screamingly cold two minutes. The first minute was pure pain, the second was alarmingly numb. I salute you, eider ducklings.

These eiders in Maine live at the southern edge of a range that encompasses much of the northern coastline around North America and Eurasia. The species is listed as “near threatened” meaning that we have significant cause for concern about its future.

Locally, here in Maine, the situation was dire but has improved. Bradford Allen‘s review of eider biology in Maine reports that over-hunting in the late 19th and early 20th centuries reduced the population from tens or hundreds of thousands of birds to just four birds nesting on one sea island. At the time, many of Maine’s coastal islands were inhabited by people; nesting birds fared very poorly alongside hungry human settlers. By 2000, after several decades of hunting restrictions and the abandonment of Maine islands to well-fed tourists, the population had risen to 29,000 pairs nesting on over 300 islands.

Across North America, population trends are mostly unknown. Hunting continues. According to the Sea Duck Joint Venture, a collaboration among scientific and management groups:

Within North America, most sport harvest occurs along the Atlantic coast; with about 15,000 birds taken in Canada and about 23,000 in the New England states. They continue to be harvested commercially (80,000+ birds/yr) in Greenland, and this may not be sustainable.

In Europe the population size is currently declining overall at a rate of >40% over three generations…Given the strong declines in the European population and a lack of compensatory increases in the North American population the overall population trend is thought to be declining moderately rapidly.

So although eider populations have rebounded from the edge of extinction in some parts of coastal Maine, their longer term future is uncertain. Current threats include oil spills, entanglement in nets, over-hunting, disturbance from expanding industrial activity, poisoning from mercury and other pollutants, predation by gulls and eagles, and nesting site disruption by development and tourism.

Maine’s history of near annihilation followed by recovery gives us reason for hope. If we can stay out of their way, young eiders will continue their 28 million year history of salt-water life.