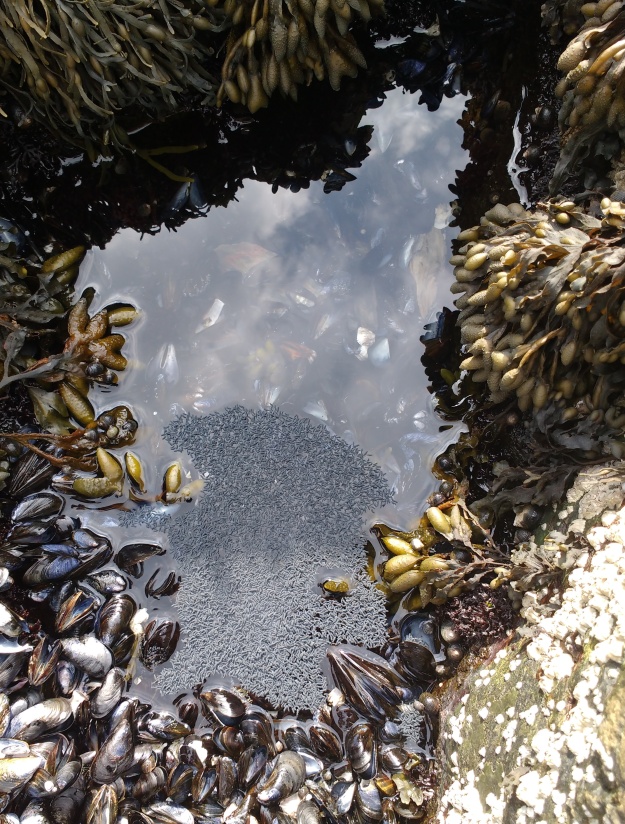 As if the tide pool surface was ice, hundreds of small gray animals skate and jiggle over the salt water. Not a single one of the animals is wet. None sink. In gusty wind their swarms blow back and forth within the confines of the rocks that wall the tide pools. In still air, the animals’ tremulous movement draws them into ever-shifting amoeboid shapes.

Anurida maritima, the “seashore springtail,” has a distribution that encompasses most of the rocky shores of the North Atlantic. This species’ daily rhythms are tuned to the tides. At low tide, the springtails disperse over the exposed rocks, scavenging for food (including discards from mollusc-throwing gulls, as I discovered a few weeks ago). About an hour before the rising tide submerges them, the springtails retreat to rocky crevices and huddle. When the tide reaches its full height, the animals are fully submerged. This rhythm seems to be controlled from within: they keep up the cycle of activity tuned to the tides even when removed to a lab.

Not many animals can be so amphibious. Oxygen, in particular, is hard to come by. Land animals have lungs adapted to air, sea creatures have gills that can extract oxygen from water. There is not much room for an “in between” state. Animals with lungs hold their breath underwater, then surface to gasp more oxygen. Marine animals exposed at low tide close their shells and trap doors to keep their gills moist. Springtails manage to break these rules and thrive by adopting the path of simplicity. Oxygen enters their bodies across their skin, so during high tide they wander in the open air without lungs. When submerged, the waterproof hairs on their bodies hold a layer of air close to the skin, like a diver’s air tank.

The springtails use more than their body hairs, though, to carry them through 3-4 hours of submergence at high tide. They seek out rocks whose undersurfaces allow several springtails to huddle within an air bubble. If they’re lucky (and clever) enough to find a good spot, the bubble keeps the animals oxygenated through the entire high tide cycle, acting like a lung into which oxygen diffuses from the sea water. By the end of the tidal cycle the bubble is depleted — it shrinks and eventually disappears — and the animals must tolerate low oxygen for a while. Then, when the waters recede, they are free to wander the wrack and see what washed up on the falling tide.

Relatively simple though this strategy may be, it is extraordinarily successful. Close inspection of rocks reveals the springtails wandering nearly every surface at high tide. There seem to be thousands of them in a single square meter. These close relatives of the insects may lack wings, internal breathing apparatus, and elaborate body appendages, but lack of anatomical sophistication has unlocked feeding and living opportunities for which no other creature seems able to compete.