My ankle brushed against the dried flower stalk of a cranefly orchid and puff! a cloud of sandy dust billowed across the surrounding leaf litter. I got down on the ground for a closer look: the orchid’s fruit capsules were mature and starting to split apart.

Each capsule is roughly the size of a pinto bean. Inside are thousands of seeds. To the naked eye the massed seeds look like piles of very fine sawdust; with a squint we can make out the individual seeds. A camera lens and digital zoom lets us see a little closer.

Cranefly orchid leaf with its distinctive purple underside. The leaf appears in autumn then dies back in the spring. 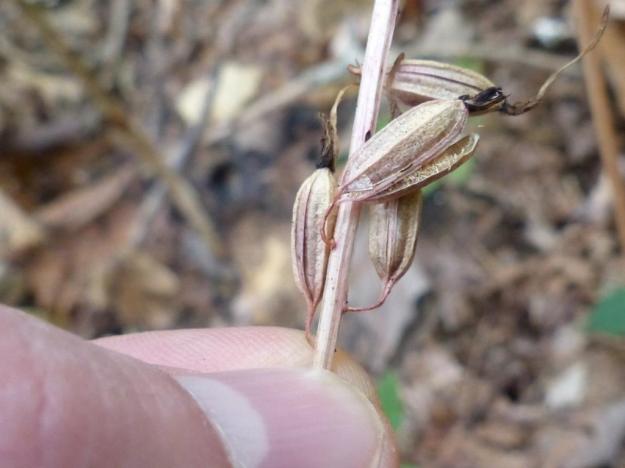 Thousands of seeds in one capsule. 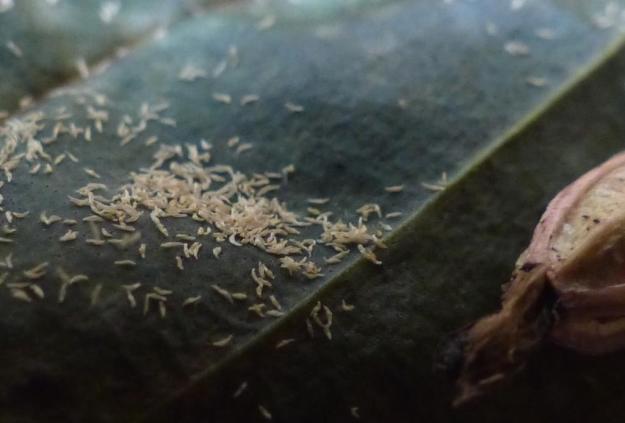 A tiny puff of air is all they need to take flight.

These seeds owe their existence to pollination by noctuid moths. The moths suffer the indignity of carrying orchid pollen on their eyes. The cranefly flower has a slight twist and the direction of this twist determines whether the left or the right eye of the moth receives the pollen.

The wind-blown seeds’ future depends on where they land. Successful growth requires (or is greatly helped by) the presence of decomposing wood, so this orchid is one of thousands of species in these forests that depend on old logs and fallen branches.

Regular readers of Ramble will be interested to know that this orchid’s only close relatives live in east Asia. It joins many other plant species in reminding us of the ancient connections between the forest of the southeastern US and those of eastern Asia.

The abundance of orchid seeds has impressed botanists for centuries. Here is Charles Darwin calculating that one plant could in a couple of generations of unchecked seed production “clothe with one uniform green carpet the entire surface of the land throughout the globe.”

“[seeds] are produced by orchids in vast profusion. Not that such profusion is anything to boast of; for the production of an almost infinite number of seeds or eggs, is undoubtedly a sign of lowness of organisation, … a poverty of contrivance, or a want of some fitting protection against other dangers. I was curious to estimate the number of seeds produced by some few Orchids; so I took a ripe capsule of Cephalanthera grandiflora, and arranged the seeds on a long ruled line as equably as I could in a narrow hillock; and then counted the seeds in an accurately measured length of one-tenth of an inch. In this way the contents of the capsule were estimated at 6020 seeds, and very few of these were bad; the four capsules borne by the same plant would have therefore contained 24,080 seeds. Estimating in the same manner the smaller seeds of Orchis maculata, I found the number nearly the same, viz., 6200; and, as I have often seen above thirty capsules on the same plant, the total amount would be 186,300. As this Orchid is perennial, and cannot in most places be increasing in number, one seed alone of this large number yields a mature plant once in every few years.

To give an idea what the above figures really mean, I will briefly show the possible rate of increase of O. maculata: an acre of land would hold 174,240 plants, each having a space of six inches square, and this would be just sufficient for their growth; so that, making the fair allowance of 400 bad seeds in each capsule, an acre would be thickly clothed by the progeny of a single plant. At the same rate of increase, the grandchildren would cover a space slightly exceeding the island of Anglesea; and the great grand-children of a single plant would nearly (in the ratio of 47 to 50) clothe with one uniform green carpet the entire surface of the land throughout the globe. But the number of seeds produced by one of our common British orchids is as nothing compared to that of some of the exotic kinds …  What checks the unlimited multiplication of the Orchideæ throughout the world is not known.”

(p. 277-279 in Darwin, C. R. 1877. The various contrivances by which orchids are fertilised by insects. London: John Murray. 2d edition, quote from the Darwin-Online archive.)