Sharp blades and muscles: These are the lab tools used lately by my class. We’ve been mapping and eradicating privet from Bluebell Island, a local hotspot for wildflowers. Privet is a non-native invader and it overshadows and kills native plants. 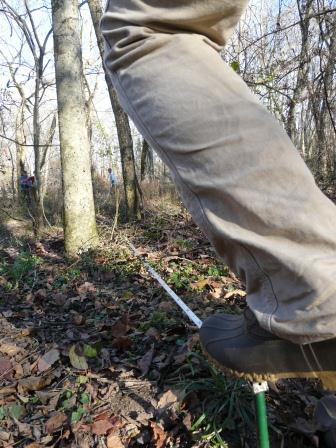 Setting up the mapping transect.

The View from Lazy Point used as a field clipboard. The class combines field work with discussions of readings, so hardback books find multiple uses. I hope Carl Safina would approve of the students’ improvised use of his fabulous book.

We uproot the privet plants. Easy to do when they are small…

…not so easy when they are big. Katie pulled this one by hand. All that work on the swim team has paid off. No need to pull out the saw.

We’re building an interesting dataset. There are not too many places where we have long-term data on the details of how invasive plants respond to attempts at control. Along with this scientific goal, we’re hoping to leave the island in much better shape for wildflowers.

What have we found? At first glance, the project seems to be failing spectacularly. There are many, many more privet plants within the project area now than there were in 2001.

But this graph does not capture the whole story. The vast majority of the stems in 2012 are tiny little sprouts, reaching to knee-height. In 2001, the stems reached over our heads and were casting dense shade.

The number of large plants (>15 or 30 mm in diameter) has decreased over time. 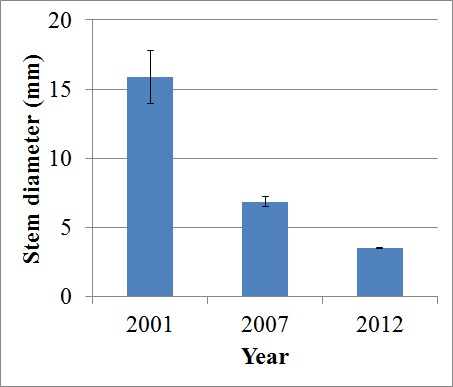 So we’ve lost big plants and gained lots of little seedlings. It seems that the removal of large privet plants allows light to reach the ground which encourages both wildflowers and new privet plants. Long term success will depend on continued visits to the island to stop new privet sprouts from getting too big. The rest of the island, outside the study area, serves as an interesting contrast. It is overrun with large privet plants and the wildflower populations are dying out. Eradication of privet over the whole island would be a more major undertaking than could be accomplished by one class, even with many days’ work. Fire and goats might help. 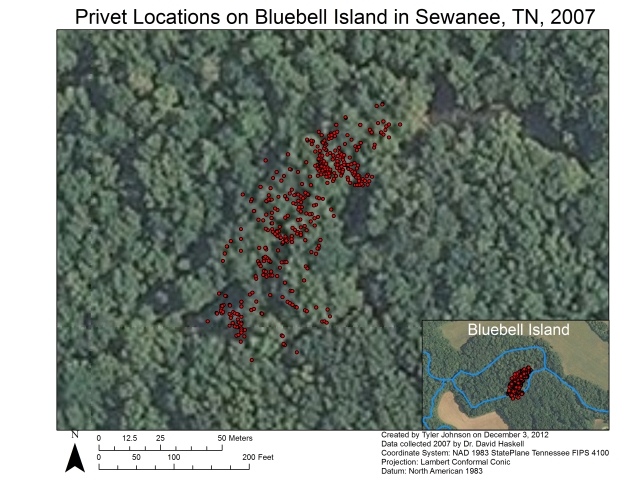 Tyler Johnson prepared this map of the location of every privet stem (2007 data) in Dr. Chris Van De Ven’s GIS class. We’ll be expanding the mapping analysis in coming months to include all three sampling periods, examining whether the spatial distribution of privet has shifted over time.

Bluebell Island is owned by the South Cumberland Regional Land Trust and was bought with contributions from naturalists in Sewanee and beyond. It hosts dense populations of bluebells, trout lilies (including white trout lily), and even the rare dwarf trillium. I’m grateful to the SCRLT board for their continued support for this work, a project that started when I served on the board but has now extended for more years than I at first imagined.

Privet is not the only threat to the island’s famous wildflower display. Gill-over-the-ground is another non-native plant species that has made inroads on the island, as has exotic honeysuckle. In addition, poachers have dug significant numbers of plants over the years. About ten years ago they hit the island so hard that many parts looked as if they had been rototilled. The bluebells gradually regrew. This year, the trespassers hit again, digging large patches. I’m pretty sure that one of these patches encompasses the only known plant of the dwarf trillium in this part of Tennessee, so this rare species may now be extirpated from the island. The poachers are targeting bluebells, but the tiny trillium plant got taken as collateral damage. I may be wrong – we’ll know in the spring – but the digging crosses the exact spot where the plant lives. So if you’re tempted by the pretty bluebells for sale at the nursery, I’d advise you to skip them unless the seller can prove to you that they were nursery-propagated.

Despite the pressures, Bluebell Island is still a marvelous place. In addition to the flowers, old trees provide great habitat for woodpeckers, owls, and wood ducks. Beavers and mink swim the river. Migrant birds ply the riverbanks in the spring. Butterflies are abundant in summer. The river itself is different on every visit. It runs clear and calm in winter dry spells; swells silty and trashy in the floods; then courses bluegreen in the warm algal summer months. Suwannee is a river, but Sewanee is not; so I enjoy my visits off “the mountain” to see some real flow. 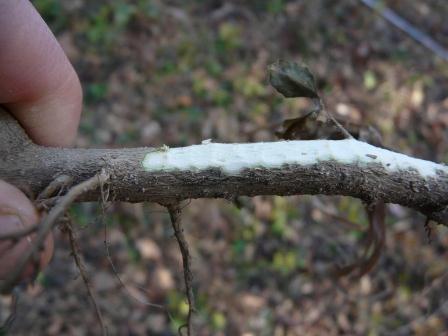 Beavers came around after us and snacked on the discarded privet stems.

I’m grateful to the many cohorts of Sewanee students who have yanked, sawed, tweaked, measured, mapped, and analyzed these thousands of privet stems. 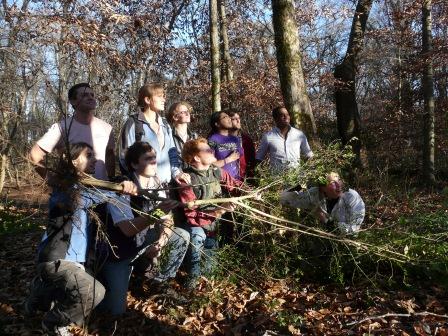 Sewanee’s Bio 315 class in “gaze at the sun as if something inspiring and important were happening” pose after pulling 4275 privet stems. The largest vanquished stem is held as a trophy. We omitted the blooding ceremony.

22 thoughts on “Wrestling with privet on Bluebell Island”