As we slide down the slope behind the equinox, animals have accelerated their autumnal movements. My backyard now consistently hosts several migrant bird species each day. In the last week: rose-breasted grosbeaks, magnolia warblers, Tennessee warblers, American redstarts, gray catbirds, chestnut-sided warblers, warbling vireos, and a summer tanager. Unlike the songsters of spring, these mostly silent birds can be hard to detect. A flicker of foliage reveals their presence, then a glimpse of their plumage as they prance through the concealing twigs. Grosbeaks are an exception to this crypsis. Although they can be hard to see, their sharp tweek call, given repeatedly through the day, gives them away. The sound is just like that of a sneaker squeaking on a gym floor. Listen for it, then look up.

Last night, as I left the Biology picnic on campus, another migrant bird making a spectacular display over the old building that houses the fire station. About two hundred chimney swifts were scything the air in a tight, fast vortex. They swirled around the brick chimney that protrudes from the station’s roof. One by one, they folded their wings and dropped in. Like hot cinders carried up by the wind, these birds seemed to ignite the dead dusky air with their coordinated vitality. A little tornado of life. The swifts are on their way south to the Amazon where they’ll feast on tropical gnats all winter. I suspect that they are speeding on their way as I write: this morning’s cold rain squalls mean there will be few flying insects in Sewanee today. Time for swifts to get out of here.

Birds are not the only migrant animals making their way through our skies. This week has seen an impressive number of monarch butterflies winging across the treetops. It seems impossible that so slow and delicate a flyer could make it all the way to Mexico, but that is where they are all headed, to a few small patches of dense fir forest in the highlands. The monarchs gather there in the tens of millions to rest in the cool but unfrozen woods. Remarkably, these autumnal migrants are the grandchildren of the butterflies that left Mexico this spring. Somehow their genes guide them to precisely the right location. 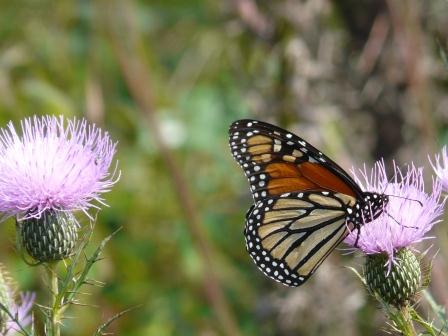 One for the road: a monarch loading up on thistle biofuel earlier this week near Lake Dimmick.

Another migrant butterfly, less celebrated than the monarch, is the gulf fritillary. This species breeds all over the southeastern U. S., but overwinters only in the deep south. Unlike the fluttery monarchs, these butterflies scull their way across the air with seemingly powerful and directed wingbeats. In Florida, where adults linger all winter, huge flocks of them will sometimes stream over fields and scrubby areas. A river of bright amber. 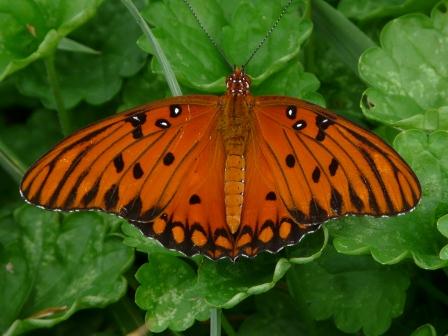