These are healthy corn tassels, ready to shed their pollen: 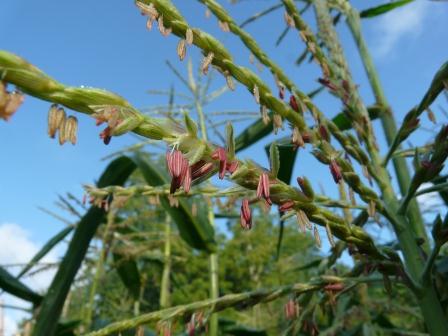 And these are tassels that have been infected by a fungus, the “corn smut” (Ustilago maydis; formerly U. zeae): 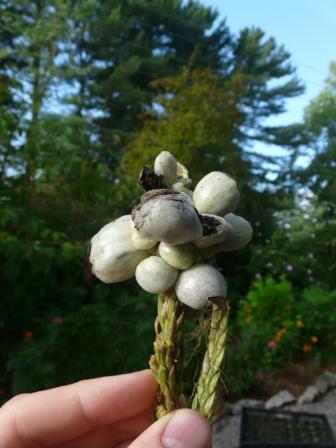 Smut spores overwinter in the soil, then as the weather warms they blow up onto corn plants and infect leaves, tassels, and ears. Like corn itself, smut is native to Mexico and thrives when the weather is hot and dry in early summer. This Mexican weather came to Tennessee in June, so we’ve had a good crop of fungal growth this year.

The fungus causes grotesque swellings on the corn. These pustules eventually burst and disgorge clouds of dark spores. The whole process is interesting to watch: the civilized, elegant growth of a plant hijacked by an ugly, destructive mob. Depending on your mood, this discord is either disturbing (the world’s order is threatened) or profoundly hopeful (the world’s order is indeed threatened). 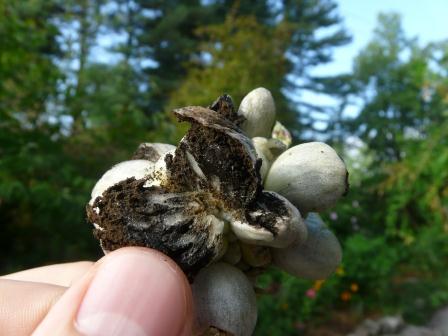 Fungal infections are usually unmitigated bad news for gardeners, but this one has a surprising silver lining. The fungus causes uncontrolled growth and swelling of cells in the corn plant, cells that then get filled with…mushroom. In Central America and Mexico, smut is considered a delicacy, called “huitlacoche,” and farmers can get a higher price for infected ears. I was unfortunately not aware of the gastronomic possibilities when I culled the smut from our corn patch. Next year, perhaps?

The word “smut” obviously has another meaning. The etymological common origins here are straightforward: lewd smut and fungal smut are both “dirty.” The Online Etymology Dictionary (one of my favorite websites…a celebration of the anastomosing evolutionary trees of language) traces the word to pre-1500s West Germanic, smutt-, “to make dirty,” through the 1400s where smutten meant “to debase or defile,” then to the 1660s when the word meant both “black mark or stain” and “indecent or obscene language.” There is a botanical irony here, of course. The smut fungus is “defiling” one of the more overtly sexual plants under cultivation, one that sheds its pollen to the air and lets both male and female parts hang exposed (at eye-level, no less; I blush to gaze at a field of corn). But only when these parts become darkened with unbidden strands of fungal desire do they count as smut. Order is indeed threatened.

5 thoughts on “One more smutty webpage”