The seaward beaches on St Catherine’s Island are littered with big clumps of sargassum, a type of seaweed normally found only far offshore. The tropical depression that blasted the island a week ago carried the sargassum toward the land and dumped it in untidy skeins in the wrack line. Some even got carried up into the marshes behind the beach. 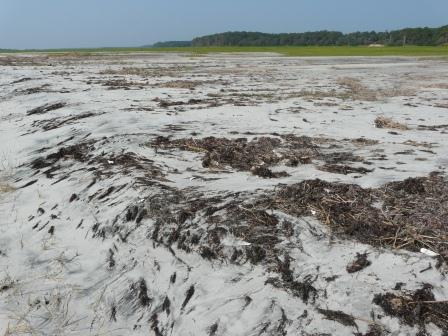 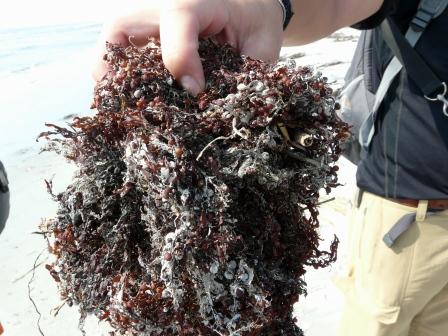 Sargassum is incredibly important to the ocean’s ecology. It grows in vast floating mats in the warm tropical currents of the Gulf Stream and beyond, even giving its name to the gyre that sits at the center of the Atlantic, the Sargasso Sea. The mats of algae serve as a breeding ground for eels, the nursery of young sea turtles, the home for legions of fish, and the feeding ground for tropical seabirds. Several years ago I took a boat ride out to the edge of this strange sea-within-a-sea (it has no land borders, being surrounded by other bodies of water and ocean currents). The water and air were torrid; the abundance of sea life was phenomenal, especially the graceful terns that plucked fish from the startlingly blue water.

Algae were not the only creatures trapped and hurled to shore by the storm. This young frigatebird was lying on the wrack on the island’s easternmost point. Frigatebirds are the real pirates of the Caribbean, making their living by robbing gulls and terns of their hard-won prey. This young bird must have been blown out of its tropical home and perished on the Georgia shore, turned to acrid-smelling jerky in the sun’s blaze.