The astronomers at UC Santa Cruz set up a motley army of observational devices on a small knoll on the edge of campus. A hundred or so people squinted through eyepieces, metal tubes, silvery sunglasses with paper frames, kiddie binoculars strapped to paper flipcharts, and heavily shielded cameras. All gazed up. 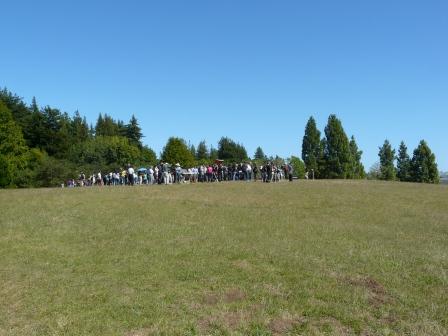 And there was Venus, an inscrutable black disc pimpling the bright sun. I expected that she’d hurl herself across the sky, but she took her time, lingering for hours as she scribed her twisted route. Most surprising of all was the frequency with which the knobs on the telescopes had to be tweaked to reorient the lens. We live on a surface of a planet that is spinning terribly fast. This was a disorienting realization, a jarring yank out of the complacency of my pathetically small day-to-day “world” and into the enormous reality of the chunk of flying space rock that we live on. I felt that I ought really to hold onto something to keep my feet steady as my eyes watched a gyrating Venus from the window of this bullet-train earth. Instead, I pulled myself together and snapped some photos. 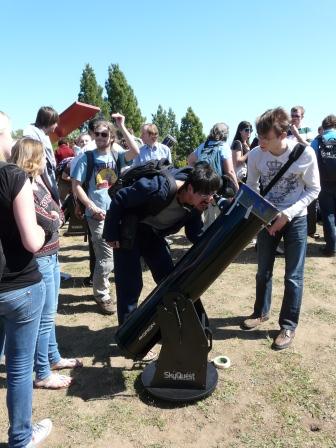 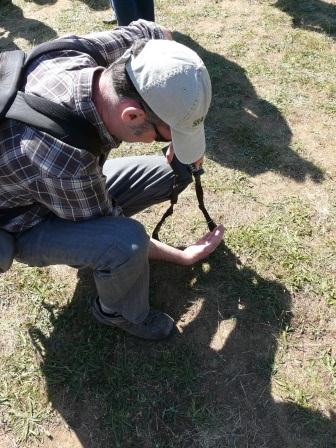 This scope was incredible. The filters in the scope filtered out everything except the 656.28 nm wavelength (see here for the cool background — this is the wavelength created by one type of electron change in Hydrogen). The roiling surface of the sun was visible; flares and loops of light arched from the sun’s edge:

Place your head inside the box at the end of the long tube and observe the image formed by the pinhole: 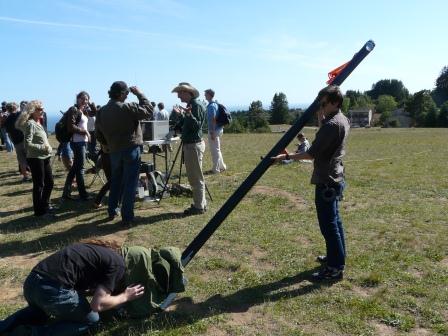 Out of their usual context, binoculars are weird. These photons have traveled together all the way from the sun to this spot on Earth, only to be split apart at the last moment. Venus and her twin: 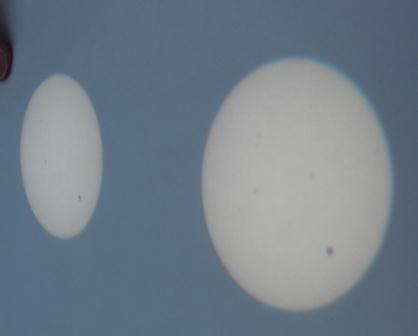 The following photos come from UCSC grad student Tuguldur Sukhbold who was taking photos through his shielded camera. I asked whether he would mind sharing the results and he was kind enough to send me these (with sunspots also visible):

4 thoughts on “Mass (viewing of) transit”