This post is in answer to a query about John Muir from Eric Keen, a fellow saunterer of the finest kind. In 2008 I had the privilege of visiting Muir’s birthplace in Dunbar, Scotland, and found that the town fondly remembers its emigrant son:

Muir's birthplace, now an interpretative center. In 1838, when Muir was born, the family quarters were cramped rooms behind a shop. The building has since been expanded and renovated. 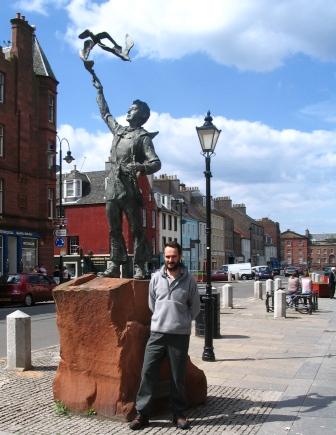 The town of Dunbar honors Muir with a sculpture of him as a boy, reaching up to gulls in flight. Pilgrims of dubious moral character loiter around the foot of the statue.

The statue's plaque quotes one of Muir's reminiscences about his childhood in Dunbar.